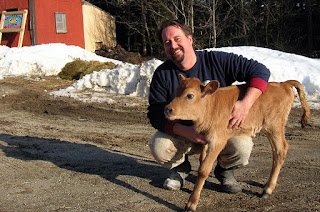 Food sovereignty has been a steadily growing movement in the state of Maine, with many towns adopting ordinances that legalize small scale food production and sales without the need for costly and time-consuming state and federal permits.  As could be expected, the state is none too happy with these recent developments, and along with the FDA, has spearheaded a recent effort to push back against the rising food sovereignty movement.

Farmer Dan Brown is a resident of Blue Hill, Maine, who owns a single dairy cow.  Dan uses much of what the cow produces to feed himself and his family, but also has an on-farm farm stand where locals go to buy bottles of the surplus milk.  Dan isn't a food distributor, and the notion of getting permits and facilities to be in line with state law is nonsensical in his case, but the state is cracking down on his operation nonetheless. According to the state and the FDA, his farm is breaking the law by selling supposedly dangerous unpasteurized milk to consumers without getting necessary inspections and permits.  Dan, his family, and his purchasers have never had health problems with his milk, while legalized large-scale factory milk producers have had countless issues over the years with their product, but this irony seems lost on state officials who want to see Dan's farm closed to consumers.  In response to Dan's refusal to shut down his operation, the state of Maine is filing suit against him.  It is up to the community and those of us who care about local small-scale food production to convince the state to drop the lawsuit against Dan Brown and respect the authority of Blue Hill's local food sovereignty laws.

Food Renegade recently wrote up a nicely articulated post on farmer Dan's plight that includes two informative videos on the subject, the more concise of which can be found here.  If you'd like to read the full post, check here.  The post also contains information on how you can do your part to end the lawsuit against Dan Brown and support the hard work of small-scale local farmers.

Hoping your Thanksgiving was a good one,
-Melissa
Posted by CT NOFA at 9:01 AM