Progress and a Different Paradigm for the New Year

We've made good progress in the past year having our voices heard on the food and farming issues we care about: healthy food for everyone, support for beginning farmers, GMO labeling, food justice, fair wages for workers throughout the food system, excess nutrient pollution and climate change. We have also made progress in animal care issues. Some restaurant and food chains are planning to eliminate routine use of antibiotics for animals and gestation crates for sows.  Sellers of unhealthy foods and beverages are struggling; organic farmers have trouble keeping up with demand.  As consumers and activists, we are feeling our power to change the paradigm. And, of course, this is all good.   However, the news of the climate, environmental and/or social chaos in so many parts of the world shows that we are very far from the path to achieving a livable future for our children and grandchildren.

Taking a longer view can keep us focused on what is important. A paradigm is a model or a way of thinking. Unless we respect and use a cyclical, biological paradigm, as opposed to a linear industrial paradigm, we don't have a chance for a sustainable and fulfilling future. 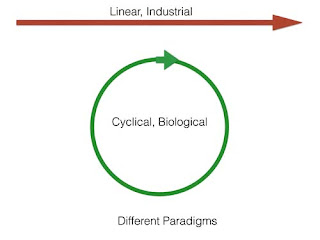 For many years, the image above has provided me with a useful tool for explaining the kind of problems caused by and changes needed in the currently dominant, industrial paradigm.

The industrial model is especially damaging in combination with an economic system focused on continual growth.  There are often distant and tenuous connections between the human and physical inputs needed to create a product or service, the consumer or user, and the land, water and air where the products and pollutants ultimately end up. Because of this, the external costs of this system, (the tax, environmental and human costs of production, transportation and disposal), are hidden from consumers. This results in lots of environmental and human health damage that the consumer doesn't see or directly pay for.

A biological paradigm, in contrast, provides essential connections between the inputs and outputs. This model provides greater transparency and encourages more localization and cycling of resources. This is good for communities but not so good for global corporations.

We can begin to understand the differences between these two paradigms using an agricultural example:  how we get nitrogen out of the air and into the soil to nourish plants.  All nitrogen comes from the atmosphere which is nearly 80 percent nitrogen.  Nitrogen in the air can be converted (or fixed) into a form plants can use by either industrial or biological systems.

In the current industrial model, developed intensively over the past two hundred years, nitrogen-bearing substances come from far away: in the 19th century from mineral deposits in Peru and Chile.  Since the early 20th century, nitrogen fertilizer has been produced through the Haber-Bosch industrial process that now begins with fracking the earth for natural gas which is then used to make hydrogen.  That hydrogen is combined (under great pressure and high temperature) with atmospheric nitrogen to make ammonia. Then that material is converted to another form, packaged and shipped to its point of use on a farm, garden or lawn. From there, some of the nitrogen is taken up by plants but much of it is moved by water either into the ground, where it makes well water dangerous to drink, or into streams, rivers and eventually into estuaries.  Higher nitrogen content makes it much more difficult to process river water for drinking. (See Des Moines' water supply problems.) It also encourages eutrophication of estuaries by encouraging the growth of algae.

In contrast, a biological approach involves using cover crops (e.g. clover, hairy vetch, alfalfa and field peas) to capture nitrogen from the air with the help of bacteria living on their roots. Other more local sources of biologically-fixed nitrogen include rotating leguminous crops (such as peas and beans) through the growing area, rotating animals through crop land and applying compost from local manures and other organic wastes.  All of these methods can provide the necessary nitrogen, especially if harsh and toxic chemicals and most tillage are avoided.

Much of NOFA's work since its founding has been informed by the development and understanding of the benefits of the biological paradigm developed over the past century.

In 1971, a group of organic agriculture and healthy food pioneers came together in Vermont to start the Natural Organic Farmers Association.  That organization is now the Northeast Organic Farming Association (NOFA) with chapters in seven states and almost 6,000 members, including farmers, gardeners, homesteaders, landscapers, scientists and educators.

The autumn of 1971 was a time of domestic turmoil over race, the Vietnam War and the environment.  However, these (mostly young) people were concerned with two things: how to grow food without toxic chemicals and with getting healthy food to those who needed it. One of NOFA's first projects was trucking organic vegetables from New England farms to day care centers, women's shelters and food coops in New York City.  (Note 1). A year or so later, the focus changed to more local markets as the need for good food was discovered closer to home.

This occurred less than a decade after Rachel Carson's Silent Spring documented the damages that pesticides were doing to human and environmental health. At that time, unless you were connected with the chemical or the agricultural establishment, it was natural to be concerned about spreading toxic pesticides on our food.  Hence the interest in organic farming. It is very instructive to read the Wikipedia entry for Silent Spring.  The dynamics of environmental issues haven't changed much. Corporations which profit from the industrial paradigm by polluting the environment and damaging human health use bought science, scientism and shady, despicable tactics to discredit the honest messenger. They also use their ill-gotten gains to buy cooperation from their friends in government. Cigarettes, pesticides, GMOs, flame retardants, fossil fuels, hedge funds, lead in paint and fuel, chlorofluorocarbons (CFCs), confined animal feeding operations (CAFOs) and synthetic fertilizers are just some of the areas where this pattern has played out since Silent Spring.

Aside from the turbulent times and the environmental issues, many of these enthusiastic young people who founded NOFA were inspired by books from earlier in the 20th Century including:

1.  Soil Scientist FH King's Farmers of Forty Centuries (1911) which describes his visits to Korea, China and Japan in 1909 to learn how those countries managed to feed themselves for over 4,000 years from small land areas. (Spoiler alert: Intensive cultivation, multi cropping, cover cropping, composting all organic wastes and human labor were the keys to their success.)

2. Sir Albert Howard's An Agricultural Testament (1940) describes his work in India beginning in 1905.  He was sent there to teach farmers proper British agriculture (fertilizers, pesticides and the whole industrial approach). Instead, he learned from the Indian farmers about making and using compost. From observing the health of villagers and their soils, he learned that "the health of soil, plant, animal and man is one and indivisible."

4. Edward S. Hyams' Soil and Civilization (1952) connected the dots between the way a society cared for its soil and its long term success or failure.

The early 1970s were full of reasons to move toward the biological paradigm. The first Earth Day was held in 1970. In 1971, Barry Commoner's The Closing Circle, Nature, Man and Technology was published.  It increased interest in ecology and inspired many of us with Commoner's Four Rules of Ecology:

1. Everything is connected to everything else. There is one ecosphere for all living organisms and what affects one, affects all.

2. Everything must go somewhere. There is no "waste" in nature and there is no "away."

3. Nature knows best. Humankind has fashioned technology to improve upon nature, but such change in a natural system is, says Commoner, "likely to be detrimental to that system."

4. There is no such thing as a free lunch. Exploitation of nature will inevitably involve the conversion of resources from useful to useless forms.

In 1972, we first saw a photograph of the whole earth from space.  So, it was hard to be content with a linear industrial paradigm after that.

Now well into the 21st century, with the new challenges from climate change, we can see the advantages of using the biological paradigm.  It turns out that organic methods of soil and fertility management are among the best strategies for both mitigating and adapting to climate change.  Careful organic practices can return carbon to the soil while also resisting the increased droughts and downpours a changing climate brings.  Industrial nitrogen fertilizer not only releases nitrous oxide (a very powerful greenhouse gas) when it is applied, it also encourages the decomposition of organic matter, impoverishing the soil ecosystem and driving further climate change.

Keeping these different paradigms in mind should help us create a more just, sustainable and resilient food system. They will help us see the differences, for example, between systems which consume electricity to provide light and run pumps indoors to grow leafy greens and those that use sunlight, soil and compost to grow food nearly everywhere.

In the new year, we need to continue to use our buying power as well as our actions (i.e., gardening, cooking, supporting farmers markets, joining CSAs, talking to legislators) to effect the changes we want to see in the future.

Note 1. Organic certification didn't exist at that time but organic growing methods were based on the books listed in this essay and the publications of J I Rodale.  Rodale was inspired by Sir Albert Howard's writings to start an experimental organic farm in 1940 and Organic Farming and Gardening magazine in 1942.  His How to Grow Vegetables and Fruits by the Organic Method was published in 1961 and provided important guidance to early organic growers.  Organic certification began in the 1980s with NOFA chapters and other organizations developing state standards.  CT NOFA certified farms from 1989 until the USDA took control of "organic" in 2002.