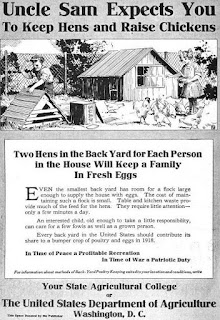 "Uncle Sam expects you to keep hens and raise chickens" is the headline on a USDA advertisement from 1918.

Beneath the headline is a drawing which includes a girl feeding a small flock of hens while the rooster looks on and a boy building a little shelter, all in an outside area enclosed by a fence. In the background is a simple chicken house which looks like a small country cottage.

Read the words on the ad!

Key points:
Two hens per person is a good ratio for fresh eggs.
Chickens will fit into most backyards.
Cost and time needed are minimal.
Food wastes can provide much of the food.
Children can care for chickens.

On the Old Solar Farm, we kept chickens for eggs and meat for forty years.  Sometimes we had just two hens.  For a while, we had nearly 100 and wholesaled eggs.  It is always nice to have a supply of fresh eggs.

Eggs are one of the most valuable and versatile of home grown foods, except for vegans and those allergic to them. Think fried, scrambled or poached for breakfast, hard boiled for a salad at lunch, made into a vegetable filled omelet or quiche for dinner and as custard for dessert. Eggs are full of protein, valuable fats and other nutrients.

Eggs are especially nutritious if the hens spend time outdoors where they get fresh air and sunshine and can forage on green plants, insects and worms.  Overripe or damaged garden vegetables and even many weeds are great chicken food, too.   Hens love those baseball bat sized zucchinis and cucumbers which ameliorates the guilt involved with letting those vegetables get too big!

We don't have chickens now so we are free to travel more, but thankfully over the past few years many of our neighbors have started raising chickens.  There are more than a half dozen homes within a mile of our farm with a self-serve cooler offering fresh local eggs by their mailboxes. Some use organic feed.  Others have a movable house and electric net fencing so it is obvious that the hens are pastured.

One indication of how far the organic movement has come is the current availability of organic feed.  When I first started with chickens, I had to go to a grain milling company in lower Manhattan to get organic feed by the ton. It was the grain and flour they couldn't sell to humans.  Now most feed stores carry it in bags and NOFA member farms in New York and Vermont produce it.

So we've come full circle!!  I'm sure many people in our rural town of Oxford kept chickens in 1918, because that made sense or because the USDA encouraged it.

What happened in between?

When I moved to our Oxford farm in 1972, Mr. Barry, a retired New York Times reporter, was raising chickens about a mile away.  He had three or four chicken houses set apart in a field, each big enough for 100 or more hens.  The houses faced south with lots of windows to let sun and air in and doors to let chickens out.  He sold eggs to corner stores in the nearby Lower Naugatuck Valley.

Not long after, another chicken business started up.  This involved a large metal building that held 50,000 hens firmly inside. Each day a dump truck carried away a load of manure the color and consistency of very wet concrete and a big box truck carried away the eggs.  After a decade, the business closed and the building was demolished.

By the 1980s, the majority of eggs produced in Connecticut came from a single large producer in eastern Connecticut with millions of caged layers. I got to take a group of high school students who were studying food and energy to visit this farm. Although there were a number of farmers at that time still raising eggs as Mr. Barry did, (and some still do) this industrialized egg operation was what our UConn collaborator wanted the kids to visit.

You have probably seen pictures of this kind of factory farm.  Rows and rows of small cages, stacked three or four high, each cage containing several hens. The system is designed so that eggs roll down onto conveyor belts for collection at one end of the long, narrow barn and manure drops to the space underneath the chickens.  University of Connecticut experts spent decades trying to solve the fly problem from all that manure that was trucked to area farms.

The chicken house we visited was dimly lit, very dusty and smelled of ammonia.  The students didn't want to be in there very long.   We also got to see the attached, highly automated egg processing facility and learned about some of the different uses for eggs.

However, the last I heard, the eggs from this farm now travel down I-95 to New Jersey for cleaning, sorting and packaging, before being shipped back to Connecticut so consumers here can buy these well-traveled eggs.  I suspect they are also sold in a number of other states.

At the time of our visit, this facility was locally owned by a farmer with a lot of connections to UConn.  A few years ago, I learned that that egg farm was owned by Moark (for Missouri and Arkansas), which is a part of the Land and Lake Coop.  I just read that this facility was recently bought by Sanderson Farms, one of the country's largest egg producers, a part of Cal-Maine company.

This same farm is one of the few facilities in Connecticut that qualifies as a CAFO, or confined animal feeding operation. I suspect that the actual buildings have been changed and upgraded over the years, but it remains a very large, indoor caged layer facility.  The hens eat genetically modified corn and soybeans, much of it from halfway across the country. They are moved in when they are about five months old and ready to lay.  After laying fewer than 200 eggs, they will become a soup ingredient. You can read a defense of their caged layer system provided to the Connecticut legislature in 2009 here.  It was still Kofkoff egg farm then.

This recent report details the progress we've made in getting chickens out of cages thanks to consumer pressure. Keep it up!

Key points:
Industrial farms are capital intensive and controlled by distant
large corporations.
Hens don't see the sun, breathe fresh air, or eat grass or bugs.
Lots of transportation is involved for chickens, eggs and feed.
Based on a linear industrial model rather than a cyclical, ecological model. 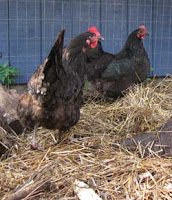 At least three approaches to agriculture and feeding ourselves are illustrated by the examples above.  The USDA's plan in 1918 involves lots of people, educates children, reduces food waste and builds fertile soil. (When we had chickens in stationary pens, I'd keep the ground covered with leaves that I collected in the fall. The chickens' scratching broke up the leaves, mixing them with their manure to create a wonderful compost.) Chickens got to do their natural chicken activities in the sunlight and fresh air.

A larger scale, commercial operation such as Mr. Barry's can have many of the same benefits. (A friend in Vermont raises about 600 chickens on the food waste from a local school.) The chickens get fresh air and sunlight, eat a variety of foods and are close to eaters. Both home production and human scale farms fit into an ecological approach to food and our relationship with the earth.

However, note the many changes with the industrial model:  no more fresh air and sunlight for the chickens.  Most of the feed is from far away. Whether the grains are from Connecticut or the Midwest, this feed is inexpensive because the government supports its production with our tax dollars, farmers are not paid fairly and fossil fuels are plentiful and cheap. Unfortunately the environmental damage done by industrial scale grain growing is not paid for. Food wastes become a big problem.

I'd love to hear about the growing egg economy in your area.

CT NOFA provides some local sources for chicks and equipment.
NOFA-NY provides Organic PoultryProduction for Eggs.
NOFA Interstate Council published Humane and HealthyPoultry Production.
For a good overview of the varieties of chickens and chicken equipment check out this company's catalog or web site.

Protection from predators is one of the most critical issues for backyard chickens. Lots of animals like to eat chickens. Earlier this month my son took this photo in his Simsbury backyard. He said: "I was thinking about chickens this weekend and realized that my worst losses always came when they were under a tree. Red tails, ravens, and coopers."