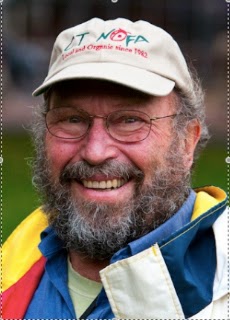 1. Use Nature’s methods/ work with Nature.
2. Pay attention to:
where things come from
where things go, and
what the effects are at both ends and along the way.
3. Think holistically.

That holistic statement is part of the USDA's definition of organic agriculture.

There are two key aspects to holism, considering the whole and recognizing the interdependence of the parts. The parts can't exist without the whole and can't be understood without reference to the whole.

Or, as it is often said in organic circles: "healthy soil nourishes healthy plants which feed healthy animals and healthy people while creating healthy ecosystems."  (Check the results of the industrial food system against that list. It is no wonder that medical costs are going up up up.  People have forgotten that real health care is an organic garden, a good diet, exercise and people and causes or work to love.)

How do we get to health? 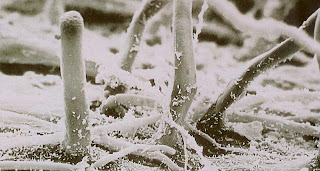 We get to health through nature's methods especially through encouraging greater biodiversity.  Similar microorganisms inhabit both our digestive systems and the soil ecosystems. Greater biodiversity is better in both systems.  This is not really surprising knowing that humans have spent 200,000 years living close to the Earth.  In fact, more and more evidence shows that living closer to the way almost all of our ancestors did is helpful to our health--spending time outside, eating whole foods, getting lots of exercise and fresh air.

A doctor friend long ago told me that he could sterilize surgical instruments in good garden soil.  He said that there is such a diversity of organisms in good soil that pathogenic ones can't get any traction.  There are similar processes and effects around plant roots (that is in the rhizosphere) which help keep pathogenic organisms away from roots.

Similar organisms live, and processes happen, on plant leaves and all over our bodies.  These microorganisms are critical in maintaining health.   As we saw in Part one, metabolic stability, which is the result of greater biodiversity creating more structural complexity and storing more carbon in organic matter, is closely aligned with health.

In a recent article in Food Safety, titled "Organic vs. Conventional Foods: Which are more likely to cause a food poisoning outbreak?" author David Schardt quoted Charles Benbrook a scientist who has studied organic systems extensively.

“Both organic and conventional foods can be a source of food poisoning outbreaks,” explains Benbrook, a research professor at Washington State University’s Center for Sustaining Agriculture and Natural Resources in Pullman. “However, in an organic system, there’s a much higher level of microbial biodiversity, so there are more naturally beneficial microbes in the system and soil.”

“Studies show that when you introduce pathogens into an organic system, they often don’t survive very long because the biologically rich community of organisms that’s naturally there either competes effectively with them or uses them for lunch,” says Benbrook.

That is very close to what the doctor told me long ago about sterilizing surgical instruments.  The most dangerous microbes are found in places with very limited biodiversity: hospitals, factory animal farms and synthetic turf.

“Pesticide use in conventional agriculture tends to reduce microbial biodiversity, both in the soil and on the surfaces of the plant. So when a pathogen does take hold, there’s more of an ecological vacuum there, and the pathogen populations can grow.”

“Most bacteria need nitrogen, and a ready source of nitrogen can fuel spikes in their levels. So in conventional systems that have an excess of nitrogen, there’s extra “gas” that can drive up pathogen levels,” explains Benbrook.

We can't talk these issues without reminding you to send in your comments on the dangerous proposed rules for the Food Safety Modernization Act.  These rules look to be designed to shut down the local food movement by closing down or making illegal many of the small farms that are addressing the demand.  Visit http://ctnofa1982.blogspot.com/2013/10/good-local-food-and-food-safety.html to find our more about the act and http://salsa.wiredforchange.com/o/5735/p/salsa/web/common/public/content?content_item_KEY=9861 for great templates to make your comments.

We can't get to health through an industrial food system

How can we expect to get to health anywhere, for people, communities  or ecosystems, if our food is based on toxic substances and dangerous chemical nutrients? Industrial farming is destroying the health of air, soil, water, as well as communities.

Just spreading the nitrogen fertilizer on cornfields, releases greenhouse gases to the atmosphere, excess nutrients to wells and estuaries and reduces soil biodiversity. The ever greater spraying of Roundup, a dangerous herbicide that kills all green plants except those patented to resist it, leads to superweeds and damaged soil ecosystems, and also likely to exotic diseases in GMO corn and soybeans.

The FDA  then increases the amount of Roundup residue that can be in our food, not for our health, but for the health of the industrial food system that is destroying health.

Nature is whole.  Everything is connected. Once we start a problem in one place, it spreads.

Although holistic thinking is necessary as long as we want to live on this planet, it is not a big part of our culture.  We're well trained to see the facade and ignore behind the scenes.

Think about the connections to that iconic American sandwich, a double bacon cheeseburger.  Is there health anywhere in the well managed supply chain for that sandwich?  It is a supply chain that includes fertilizer and pesticide factories, GMO monocultures of corn and and soy, industrial strength factory farms producing beef, pork and milk, low paid laborers in south Florida picking green tomatoes for a pittance, enormous slaughterhouses and processors, lots of refrigeration, packaging and trucking and so much more. None of it is any better for the health of the Earth than the sandwich is for us.

Where in the many long supply chains for that one sandwich would you like to live or work?

We all pay the price for this ill health.The ill health is holistic. Melissa Spear of Common Ground High School in New Haven writes: "I spent the weekend in south Chicago and was really struck by the juxtaposition of the overwhelming number of fast food establishments located next to drug stores advertising 'Diabetes Supplies,'  There were messages and ads about 'treating' diabetes everywhere I turned but I literally did not see a single a full service grocery store in ANY of these neighborhoods.  How is this possible?"

Holistic thinking and accounting are a critical part of getting us to a just, sustainable and healthy food system--accounting for the many benefits of local and organic food system and for the very serious costs of the long distance industrial one.

I welcome your thoughts.