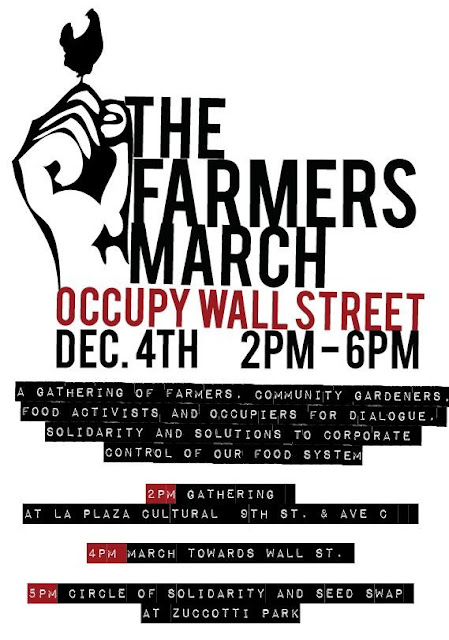 Did you know that only 1% of America's population lists their occupation as "farmer". That is 1% of our population that feeds 100% of our population.
The Occupy movement, in its flexibility and broad appeal, has also become a central part of the sustainable food, food justice, and sustainable farming movements.  You probably get why the occupy movement complements the sustainable food movement, but lets go over a few important connections to make:
Given all these connections (and there are many many more) farmers have joined Occupy Wallstreet. On December 4th, food justice activists (both producers and consumers) traveled from all over the coutry to occupy in New York City.  The march began at La Plaza Cultural Community Farde and ended at Zuccotti Park/Liberty Plaza.
The message was that much of rural America supports the Occupy movement.  The movement is not made up of lazy, spoiled notheasterners who would rather camp in parks in below freezing weather than get a job (come on).
Another occupy movement in New York City, protesters at Morning Glory Community Garden in the South Bronx were broken up by police and five were arrested.  The police broke up a festival in celebration of food on the sidewalk because the community garden supporters had no permit.  I should also add that the community garden (which used to be in illegal dumping site) was raided by the NYC Department of Housing Preservation & Development - pulling plants out by the roots, deconstructing raised beds, and building a fence around the community space in November.

Remember even if you're not prepared to put on multiple winter coats and illegally camp in Zuccotti Park, you can occupy the food movement.  The only people who don't benefit from local food production are the large companies and corporations that have crafted our imbalanced global food system, and if they're not ready to change, then it's time to stop supporting them.

On that note, have a lovely weekend!
~ Kristiane
Posted by CT NOFA at 9:15 AM