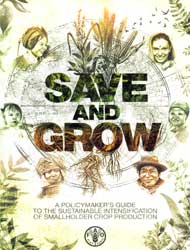 Local, ecological farming has been framed as the new paradigm for global agriculture in the Food and Agriculture Organization’s (FAO) new report “Save and Grow.”  1 billion people face absolute hunger and another 2 billion endure chronic nutritional deprivation, and these figures are expected to grow as global food prices continue to climb.  High food prices are known to have contributed to the Arab Spring revolts.
According to food policy analyst, Wayne Roberts, in NOW Magazine, the link between hunger and regime change has made food a policy issue calling for attention from the elites who manage world politics.  He writes in this article, about a meeting of the G20’s agriculture ministers in June.  The ministers had been called together to address the issue of growing food prices because of their role in civil unrest, but did not really discuss the heart of the problem - large-scale corporate agriculture.
The FAO recently published “Save and grow: A policymaker’s guide to the sustainable intensification of smallholder crop production.”  The foreword outlines the past of the Green revolution, that high-yielding crop varieties, irrigation, agrochemicals and modern agricultural management had a role in saving around one billion people from famine.  However this intensive crop production came at a cost: the degradation of fertile land depletion of fresh water.  As our population grows the yield growth rate of food is declining.  Diversity and locality are what count in food production.  As Wayne Roberts points out in his article in NOW Magazine, 80% of human calories come from 12 super crops.  This mono-cropping lends itself to big agriculture business, but also to the spread of plant disease and vulnerability in the case of crop failure.  The “new paradigm” according to the FAO report is that “in order to grow, agriculture must learn to save”.  Conservation agriculture minimizes tillage, protects the soil surface, and alternates cereals with soil-enriching legumes.  This new paradigm is sustainable crop production intensification – or “save and grow”.
According to the publication: “SCPI represents a major shift from the homogeneous model of crop production to knowledge-intensive, often location-specific, farming systems. Its application will require significant support to farmers in testing new practices and adapting technologies. Governments will need to strengthen national programmes for plant genetic resources conservation, plant breeding and seed distribution in order to deploy improved crop varieties that are resilient to climate change and use nutrients, water and external inputs more efficiently. Fundamental changes are also required in agricultural development strategies. Policymakers must provide incentives for adoption of SCPI, such as rewarding good management of agro-ecosystems . . .”
Posted by CT NOFA at 9:23 AM