NewScientist Magazine recently reported on a study which looked at proposed threats to our world.  We have all heard about climate change, but what about other environmental problems like acidifying oceans and dead zones in the sea?  At what point have we crossed the threshold of no return?  How long can we as humans operate before destroying our world?
A team of scientists came up with nine “planetary life-support systems” that are vital to a healthy Earth, which in turn means human survival.  These include:
Rate of Biodiversity Loss
Climate Change
Nitrogen Cycle
Phosphorus Cycle
Stratospheric Ozone Depletion
Atmospheric Aerosol Loading
Chemical Pollution
Ocean Acidification
Fresh Water Use
Change in Land Use
And guess what…we have already overstepped three (rate of biodiversity loss, climate change, and nitrogen cycle) of these boundaries!  However, this doesn’t mean that we’re doomed.  Back in the 70’s we realized the serious damage that we were doing to the ozone layer and it's now at a safe level. 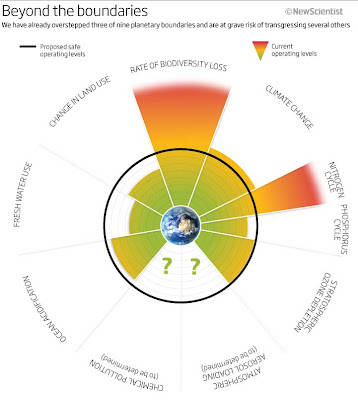 The first step is recognizing the problem. Please take the time to read this article and pass it on.  For the full NewScientist article, visit http://www.newscientist.com/special/ocean-to-ozone-earths-nine-life-support-systems
To read the full study, check out http://www.ecologyandsociety.org/vol14/iss2/art32/
Posted by CT NOFA at 10:33 AM