I stopped into a nearby chain supermarket on the way home from work the other day to do a little shopping.  Just outside the entrance were piles of two kinds of bagged potting soil, both clearly labeled organic.  One even bore the OMRI seal. (This means that the Organic Materials Review Institute has found that the product is suitable for use on an organic farm according to the Federal Standards for organic agriculture.) 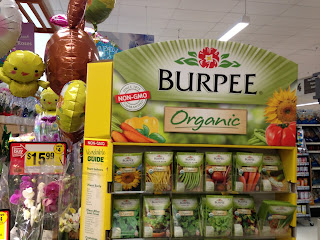 Once inside, I saw a big display of seed packets, proclaiming boldly that the seeds are organic and non GMO.  Many of the store's staff wore tee shirts with messages about organic on them.

Like most of the chain's locations, this store has a separate organic/natural section as well as organic products mixed in with their conventional counterparts-vegetables and fruits, dried fruits and nuts, dairy products and pasta for example. This trend is common all over the country.  In our travels, it is only in the very rural Midwest and Intermountain west that organic products are rare.

Forty-five years after NOFA started promoting local and organic agriculture, it seems like we've won on the organic issue. Consumers get it, even as industrial agriculture and its suppliers and supporters continue their decades long resistance and/or hostility to organic. I know there is a lot more work to do to convert all of our agriculture and food systems to organic practices, but the rate of growth in sales and consumer interest mean that it is inevitable.

According to US Secretary of Agriculture Tom Vilsack:
America's organic industry is booming, creating important opportunities for farmers and ranchers and adding to the vibrancy of rural America. Under the Obama Administration, we've made transformative investments to help the organic sector thrive by making certification more attainable, providing more support for organic operations, and expanding international markets. As consumer demand continues to grow, USDA is here to support producers and help them access the hunger for American-grown organic products...Organic food is one of the fasting growing segments of American agriculture.

According to a recent report from the Organic Trade Association, total organic food sales in this country rose 10.6 percent in 2015 to $39.6 billion. Since 2007, total organic sales have doubled. 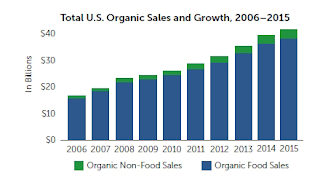 Organic fresh fruit and vegetable sales were $13 billion last year, up ten percent from 2014.  That figure also includes estimates of sales from farmers markets, retail stores, community supported agriculture groups, mail order and online sales, as well as direct sales to consumers and exports.  It does not include the value of vegetables produced organically in the increasing number of home, community and school gardens. 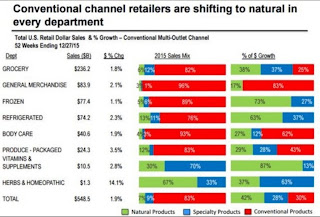 Sales of organic apples have grown (12 to 15 percent a year for four or five years) while sales of conventional apples have fallen (1 to 2 percent each year).Consumers understand the value of purchasing organic food. The food market is shifting toward clean ingredients, including organic ones, in response to consumer pressure.

Another survey found that nearly three quarters of the families in this country make an effort to buy organic and that 85 percent of parents said that buying organic was extremely or very important when purchasing baby foods. And, 84 percent said the same about buying foods for their children.

According to Carl Jorgensen, the director of global consumer strategy of wellness at Daymon Worldwide (a brand-building company), “Organic is mainstream now...At the very least, three-fourths of American consumers are purchasers of organic products. That’s not a niche, that’s mainstream.” He was reacting to PepsiCo's launch of organic Gatorade.

As reported in BeverageDaily, Jorgensen said he wouldn’t be surprised to see Coca-Cola launch its own organic version flagship products in the near future in response to PepsiCo’s announcement. He cited a number of other companies, including Campbell’s and General Mills, that are taking steps to "go organic," remove GMOs* and utilize all-natural ingredients - to bring in profits from the “better-for-you” market. 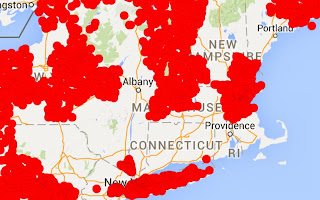 Another OTA survey looked at household income, poverty rates and growth rates in what it calls "organic hotspots." Those are counties in the United States with a high level of organic agricultural activity that have neighboring counties also with high organic activity.  The Penn State agricultural economist who did the study found that in those organic hotspots median household income is over $2,000 greater and the poverty rate is reduced by more than one percent. Being an organic hotspot reduced poverty more than anti-poverty programs such as SNAP (formerly known as food stamps) and the Women, Infants and Children programs.

The map of organic hotspot counties is not surprising.  They are concentrated in the Northeast, upper Midwest and along the West Coast.  The only hot spot in Connecticut is in southeastern Connecticut, but we are surrounded with hotspot counties on Long Island, in much of Massachusetts and in the Hudson Valley.  The study found that the hot spots are concentrated in states with non-profit organizations that provide both certification and educational programs and services for farmers and those where the state provides certification services.  The NOFA chapters in New York and Vermont provide certification and education as do the Maine Organic Farmers and Gardeners Association and the Pennsylvania Association for Sustainable Agriculture. Baystate Organic Certifiers, formed from the NOFA/Mass certification program, provides certification services in Massachusetts and Connecticut.  In Rhode Island, New Hampshire and New Jersey, the state provides certification. At the time when certification programs were first established prior to the October 2002 effective date of the National Organic Program, CT NOFA was still an all-volunteer organization without the resources to create a USDA accredited certification program. We encouraged the Connecticut Department of Agriculture to become a certifier, but their application was rejected. That was the time when Governor Rowland was trying to get rid of the Department of Agriculture so there weren't the resources needed to fix the application and reapply.

All this presents us with two questions.

1. With greater consumer enthusiasm and more economic success, why hasn't organic grown even faster?  For an answer, look to the playbook of the tobacco, pesticide, lead and fossil fuel industries or read the new book Dark Money by Jane Mayer. Or read this piece about Agroecology, a traditional and mostly organic agricultural system.  The eminent agroecologist Professor Miguel Altieri put it this way:
The issue seems to be political or ideological rather than evidence or science based. No matter what data is presented, governments and donors influenced by big interests marginalize agroecological approaches focusing on quick-fix, external input intensive 'solutions' and proprietary technologies such as transgenic crops and chemical fertilisers. It is time for the international community to recognize that there is no other more viable path to food production in the twenty-first century than agroecology.

2. And, what about the other issues that have been important for NOFA over the last nearly five decades: local production, food justice and climate change?  We're working on all of those through our beginning farmer programs, our work with the Agricultural Justice Project and the new Carbon Farming Initiative. We probably don't have another 45 years to make great progress on these issues.

Clearly, we've got a lot more growing to do.

*Labeling GMOs is another issue where consumers and, increasingly, consumer products companies are getting it.  This essay by long time organic farmer and NOFA member Elizabeth Henderson is important in this context.