Hail to the Dandelion!


Little is more emblematic of our culture's dysfunctional relationship with Earth than our relationship with the dandelion. We spread cancer-causing, chemical toxins around our homes and public places to kill plants that produce healthy and delicious dark green leaves (and may also help cure cancer). Check on pesticide toxicities here. Meanwhile we eat store-bought dark green leaves (which are mostly water), packaged in plastic and grown 3,000 miles away in a state in its fourth year of serious drought. 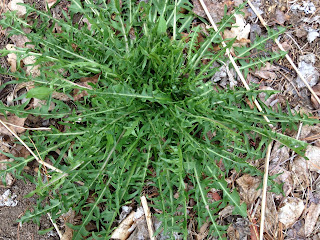 I really enjoy snacking on dandelion leaves when I'm working in the garden. Dandelions were the last food I harvested outside in January before the snow buried everything and the first green leaves we ate this spring.  Besides garden snacks, we've used these vitamin-rich greens in salads and stir fries for at least a month now.

Although I've long appreciated the dandelion as a harbinger of spring, have snacked on and cooked the leaves for decades and have even made earthy wine from the flowers, I hadn't actively cultivated dandelions until last year.  I started getting serious about this when the advantages of growing perennials to improve soil health finally sunk in.  Disturbing the soil damages it.  Perennial crops cause far less soil disturbance.  We've grown a number of perennials for years: strawberries, raspberries, blackberries, blueberries, hazelnuts, mints and other herbs, garlic chives, comfrey, horseradish, grapes and more.  Dandelions are perennials that already grow in the garden.  Why not weed around them as we do with clover, another valuable perennial, and learn to harvest and eat them?

Plants connect the atmosphere and the soil.  Whenever they are photosynthesizing, they are pumping a variety of carbon-containing compounds (called root exudates) into the soil to feed soil organisms.

Those organisms - billions of bacteria, fungi and the rest of the soil food web - respond to chemical signals in the root exudates and provide the specific nutrients that plants need.  Managed properly, this process can also result in carbon being sequestered in soil organic matter, helping to fight or reverse climate change.  That's why bare soil is such a violation of nature - it starves the soil organisms.

Dandelions photosynthesize between nine and ten months a year, so they are feeding soil organisms all that time, probably with a variety of helpful exudates mirroring the complexity and richness of the leaves' contents. Their tap roots open up passages deep into the soil for water, air and organisms.  When leaves are picked, some of the roots die and slough off to keep the plant in balance. This adds more carbon to the soil. (Managing this process on pastures with careful grazing can result in large increases in soil carbon.)

The dandelion is scientifically known as Taraxacum officinale which translates roughly to "the official remedy for disorders." All parts of the plant have been used medicinally for more than 1,000 years. Dandelion greens have at least as much vitamin A per gram as any food except red hot chile peppers and liver, more potassium than bananas and more calcium per gram than whole milk. Its leaves have been fed to English racehorses to build strength and health and used to make beer.  Recipes are here for the flowers, here, here and here for leaves. I favor the last one with the double garlic and ginger or capers.  We've never boiled the dandelions before cooking.

The bright yellow dandelion flowers also make an earthy wine. About one gallon of flowers makes a gallon of wine. The leaves are said to get more bitter once the plant flowers, but that is a matter of taste.

Dandelion root is a diuretic. As such, it may be useful for premenstrual syndrome, high blood pressure and congestive heart failure. It is said to be good for the liver and to help prevent gallstones, too. A dandelion root extract is currently in clinical trials in Canada to study its cancer-killing effect.

Dandelions provide important above-ground benefits to the ecosystem too. Honeybees and at least 92 other insects collect its nectar and/or pollen. Birds are fond of its seeds.

Yet, advertising images of dandelions are a marketing tool for toxic pesticides.  That's the way most Americans probably think about dandelions. Selling more of and getting greater profits from whatever it is that you are making or selling is the name of the game in this system.  But if certain real costs (to the environment, taxpayers or society) aren't included in those calculations, we have flawed and expensive results.

Our current system is clearly not sustainable.  Undifferentiated, exponential economic growth is a dead end. A simple example is the increase in bigger garden centers stocking larger piles of weed and feed lawn products (combinations of one or more herbicides with water-polluting fertilizer) to sell to more homeowners and landscapers who become further disconnected from reality. Where will it end? In many ways and places, we are reaching the limits of the damage we can do to our environment and still live here.  There are definitely limits to the disconnection we can tolerate between marketing and ecological reality if we are to survive.

In our kind of economic/political/cultural system, the costs (toxicity, fewer soil organisms and bees, less stored carbon and perhaps more cancer and disease) are spread broadly throughout society and the environment. Concurrently, the profits are concentrated more and more in fewer and fewer hands.  A recent report compiled for the United Nations showed that many of the world's most profitable industries would not have any profits at all and could actually have very large losses if environmental impacts were considered.  And that study ignores social costs and taxpayer subsidies which would decrease the profits of pesticide, big ag and many other industries even more.

Learning about dandelions, their relationship with other living things and the costs of having them as an enemy provide a model of the kind of holistic thinking needed for our survival.  Everything is connected.

Coming to the rescue is the idea of holism, of using all the costs and benefits to guide us to a sustainable future.  I'm not an economist, but I like what I see in the Capital Institute's report Regenerative Capitalism: How Universal Principles And Patterns Will Shape Our New Economy by former banker John Fullerton. In consultation with a diverse advisory group, he produced this report which explores using holistic thinking and planning to address the problems our very un-holistic system has caused. More on this in the future.

So next time you see a dandelion, think of it as an ecological champion and delicious food and remember the importance of holistic thinking.  It has long been a part of the organic gardening, farming and land care movement.

To learn more about caring for your yard organically visit organiclandcare.net and see especially this downloadable booklet.