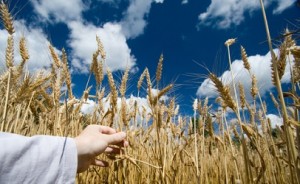 Foodborne illness can happen in any environment, whether on a small farm, in your kitchen, or in a huge industrial food supply chain. In industrial ag, however, complications arise because it's often hard to locate the source of a foodborne pathogen.  Food Safety News recently featured an articleabout farm-to-fork traceability - how well recorded the processes are that foods go through during the time between harvest and consumption. Their report shows that cumbersome long distance supply chains like the one that provides the majority of America's food, are fraught with recording system incompatibilities and a lack of consistency, making it difficult to trace a pathogen outbreak back to its source in a timely fashion. The article weaves this tale:


Picture a pile of tomatoes in the produce section. Farms supply tomatoes to a distributor, who gives them a product code before passing them onto a retailer who may give them a different identifying code. Go find a can of diced tomatoes in another aisle and the number of changed hands and identification codes may have doubled. Find a jar of salsa — the ingredients, codes and suppliers compound exponentially.
Now, throw a Salmonella outbreak into the mix. Hundreds of people around the country report illnesses and face interviews with investigators asking them to recall several weeks of meal histories.

At first, interviews seem to point to tomatoes as the most likely source — maybe a lot of the victims ate salsa — and so investigators begin tracing back through the tomato supply chain in search of the contamination. Eventually, however, the investigation into tomatoes dries up, and it only later becomes apparent that the outbreak was instead likely caused by contaminated jalapeño peppers.

That’s what happened across 43 states in the spring of 2008, and while investigators were tracing back through tomato supply chains, the jalapeños were granted more time to sicken additional consumers.

The industrial food system has a lot of inefficiencies, and a lot of middlemen.  In such an overly complex system, problems tend to arise and are difficult to solve. As a person eating those products, it's hard to trace where each ingredient is coming from and what processes it went through, so consumers are heavily reliant on the industrial food system's faulty food traceability mechanism.  This reliance is inefficient and dangerous, but there are alternatives!

If you want to know what's in your food, there are a few easy things you can do:
It's easier now more than ever to buy local!  Check out our brand new Farm and Food Guide to find a sustainable farmer, business, or farmers market near you.  You can also visit the CT Farm Map online for an interactive farm location experience!

Have a great afternoon,
Melissa
Posted by Unknown at 11:02 AM