After Melissa's blog post the other day about Coca Cola, I thought it was only appropriate that I follow up with a post about high fructose corn syrup (HFCS). High fructose corn syrup is the second ingredient in a Coca Cola  beverage (carbonated water is the first) and can be found in other sodas, juices, and many condiments. Although there is no  research that directly links this sweetener to health problems, too much sugar in any form can be extremely bad for your health, causing obesity, diabetes, and heart disease (find out more here). 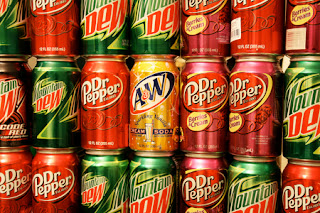 But enough with the negativity - the news that I have to deliver about HFCS is positive (for the most part).

According to an article by Grist.com, an environmental news forum, Americans have been consuming less high fructose corn syrup and only 4.5 percent of corn produced in the United States this year it expected to be used for the sweetener.


"Americans consumed an average of 131 calories of the corn sweetener each day in 2011, down 16 percent since 2007, according to the most recent USDA data. Meanwhile, consumption of sugar, also blamed for weight gain, rose 8.8 percent to 185 calories daily, the data show.

Even with the increase in sugar use, total U.S. sweetener production remains down 14 percent from a 1999 peak, according to the USDA.
“We’re seeing a real decline, and that people aren’t just switching to sugar,” said Michael Jacobson, executive director of the Center for Science in the Public Interest in Washington."
Despite the good news, we cannot ignore the "serious public health hangover" that Americans are faced with after decades of consuming sweeteners such as HFCS. This past week researchers in Philadelphia found a 70 percent increase in diabetes in kids under the age of 5 over a 20 year period.
Regardless, it seem as if the ads similar to the one in Melissa's blog post aren't fooling everyone. In that case lets raise our glasses (of water of course) to our fellow Americans for making a positive change for their health!
Katie
Posted by CT NOFA at 9:00 PM