Neonicotinoids (or neonics) have again been implicated in three new studies about the cause of Colony Collapse Disorder (CCD).
Over a million bee colonies disappear every year, leaving behind only a few unhealthy bees and the queen in the hive.  The link to neonicotinoids has been highlighted before, but the chemicals are now more closely linked to the bee deaths while reduction in habitat is a lesser factor.
Tom Philpott's article "3 New Studies Link bee Decline to Bayer Pesticide" for Mother Jones lays out the evidence that bees are mostly affected by the neonics pesticides used for corn.  The pesticides are not only applied to plants on a broad scale, but most of the United States' 94 million acres of corn (over 142 million acres including other crops) will be planted with seeds treated with neonic pesticides. Philpott points out that the findings will pressure the EPA to reconsider its registration of the pesticides based on a study carried out by the same chemical company that makes the pesticides (Bayer).  The EPA later found that the Bayer study was not satisfactory in proving that honeybees were safe.  Philpott links to an EPA memo which questions the study: 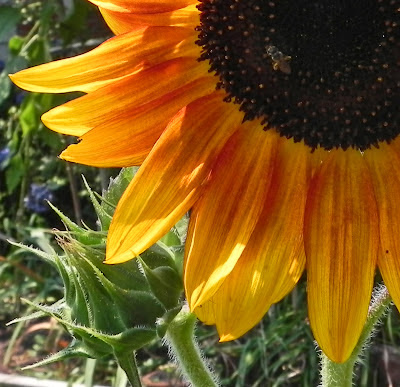 ". . . after another review of this field study in light of additional information, deficiencies were identified that render the study supplemental . . . another field study is needed to evaluate the effects of clothianidin on bees through contaminated pollen and nectar.  Exposure through contaminated pollen and nectar  and potential toxic effects therefore remain an uncertainty for pollinators"

Heather Pilatic, Co-director of the Pesticide Action Network in North America weighs in on the evidence in the Huffington Post Blog.  She highlights that the neonics cause a variety of health problems for bees: low-level exposure can make bees more susceptible to infection, impair memory and learning, disrupt foraging and homing abilities, and can cause an 85% reduction in the number of queens produced. A single flight over freshly-sown corn fields can result in enough exposure that bees die right away.

This Reuters article, by Richard Schiffman highlights that bee farming has also become, to some degree, industrialized.  The bees are fed high-fructose corn syrup (made from corn treated with neonics) and queens are artificially inseminated resulting in a decline in genetic diversity among honey bees.

As you probably know, most of the food that humans rely on is pollinated by wild pollinators and honey bees (wild pollinators, like bumble bees, are having the same population reduction as honeybees).  And we are in serious trouble if wild bees go extinct, and we continue to lose a third (or more!) of commercial honey bees each year.

An important note for homeowners: most pesticides for garden and lawn use contain the chemicals that are harmful to bees.  For the bees sake (if not for your own, for your pets, and for your environment), it is important to cut out the pesticides.  Even trace amounts are fatal to bees. The best neighbors are the ones that plant flowers that feed bees, and cut the chemicals that harm them!