California is continuing to demand its Right to Know. 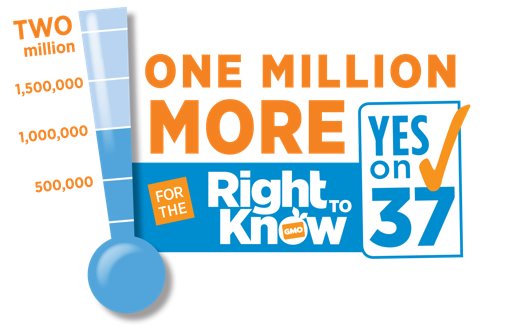 The Right to Know is building momentum in California leading up to the November ballot on the issue.  Known as the "Yes on 37" campaign and the "Right to Know Campaign", the movement has received endorsement from the California Labor Legislation and Senator Barbara Boxer and State Senator Mark Leno.

According to the Digital Journal article 'Yes on 37' Right to Know - organizing one million more voters, Senator Boxer said yesterday, “California consumers have the right to know if their food has been genetically engineered. This basic information should be available for consumers on the label the way it is in nearly 50 other countries around the world.”

The bill has also been endorsed by the Consumer Federation of America, the United Farm Workers, California Certified Organic Farmers, Public Citizen, Organic Consumers Association, the California League of Conservation Voters, the Union of Concerned Scientists, the Center for Food Safety, and the Sierra Club.  This coalition of farmers, agricultural non-profits, consumer advocacy groups and environmental groups demonstrates the broad spectrum of interests in GMO-labeling.  The only opponents seem to be food companies that use GMOs and the corporations that develop genetically modified crops, seeds and foods.  GMO-labeling is also supported by about 90% of California's voters based on voter polls.

The California ballot initiative might lead the way for GMO-labeling in the rest of the country! We are so excited for this progress, you can learn more about the California Right to Know Campaign at their website, and cheer them on while we keep generating support for the Right to Know here in Connecticut.