Looking Back to Look Forward - Independence in America 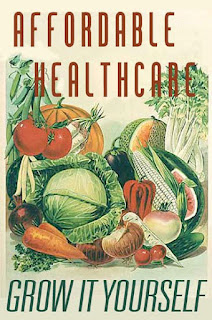 Back in 1976, Robert Rodale wrote an editorial for the September issue of Organic Farming and Gardening about personal independence.  Almost 36 years later, the relationship between personal independence and sustainability is a major issue in current social and political movements, regardless of whether those movements are conservative or liberal, and related concerns about food, energy, and healthcare are some of the most hotly debated topics in the United States today. Case in point: the images in this post are not from the 70's; they're part of the current shift in mindset from reliance on outside groups to a more local and holistic approach to living, an approach Rodale discusses in his editorial:


The garden is the best place to start looking for ways to help people become more independent. A garden is both the symbol and reality of self-sufficiency—especially an organic garden, which recycles organic wastes of the yard and household, permits the production of significant amounts of food with only minimal reliance on outside resources. Any campaign to boost personal independence should start by helping people become gardeners—teaching, motivating, and making land available.

Liberty doesn't end at the border of the garden, though. Home production of a variety of goods and services extends the idea of gardening. Both gardeners and non-gardeners can also grow their own bean sprouts, make some of their own clothes, become proficient at crafts, improve insulation of their home, and do similar home production tasks. Each such activity you learn makes you less dependent on others.

Even treatment of disease could be improved by fostering a greater spirit of personal independence. We need to learn more about how to take care of ourselves during illness. Any doctor will tell you that an intelligent patient, who knows how to observe and evaluate symptoms, can be treated with fewer drugs, and is therefore less likely to have side effects and will probably recover faster. Being totally dependent on the doctor is the worst way to act when sick.

As of yesterday our nation is one year older.  As you take time to be with friends and family and celebrate our country's independence, take a moment to think about your own independence and what that means to you. Think about all the ways you can take charge of your life and live more independently, and save money be healthier and happier as a result. Whether your goal is to start your own garden, replace some of your driving with bicycling, or buy goods and services from people in your town, every step you take toward sustaining yourself is also a step toward making us more sustainable as a nation.  What better way to show your patriotism than by advocating for one of the most fundamental ideals of our country?