2,4-Dichlorophenoxyacetic acid, or 2,4-D is the most widely used pesticide in the world, and one of the main pesticides used in North America.  2,4-D was made especially famous (or infamous) by it's inclusion in Agent Orange, the defoliant used by the United States to wage war on Vietnam's countryside in the Vietnam War.

The herbicide has been used in the U.S. since the 1940s and is used in about 600 products registered for agricultural, residential and industiral uses (Beyond Pesticides).  The chemical has also been associated with a number of serious health isues including soft tissue sarcoma, non-Hodgkin's lymphoma and birth defects.

In 2008, the Natural Resources Defense Council requested that the EPA cancel all product registrations and revoke any tolerances for 2,4-D.  A "tolerance" refers to a legal residue limit in food.   The EPA reviewed the data cited by the NRDC and the new studies submitted to the EPA and has ruled that there is not enough data to conclude that 2,4-D is directly contributing to cancer and health issues. 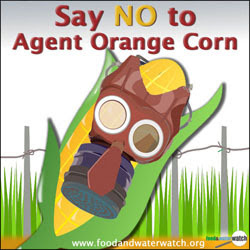 This is especially worrisome, because Dow AgroSciences is seeking federal approval to sell corn seeds that have been genetically modified to be resistant to 2,4-D which will most likely result in even more widespread use as we have already seen with the use of Round-Up on "Round-Up Ready" genetically modified crops.

The New York Times article on the subject reported that the main study which conflicted with the studies submited by the NRCS was one financed by 2,4-D manufacturers conducted by Dow, which exposed test rats to the chemical and found no reproductive problems related to the exposure.
Posted by CT NOFA at 9:58 AM