The Drought Goes On 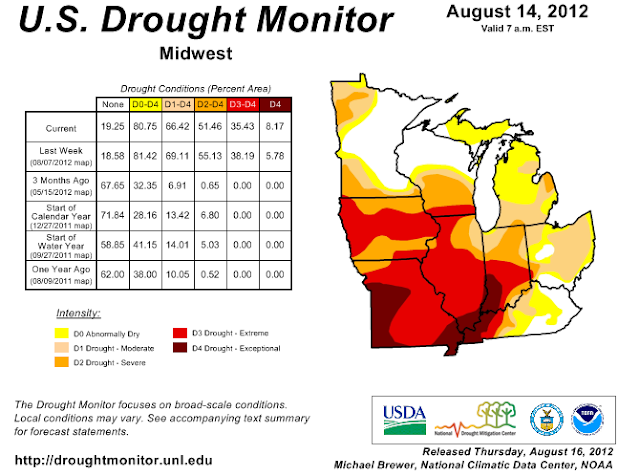 Yesterday the USDA announced that Illinois farmers are eligible to apply for emergency assistance because of the drought.  The dry conditions intensified in Kansas and Nebraska while relenting slightly in Iowa.  There are even extreme drought conditions in Hawaii forcing ranchers to reduce their herds as they struggle to grow grass to feed cattle.  Hawaii is used to some drought conditions, because of El Nino conditions on the island, however some ranches are complaining of up to eight years of drought conditions.

Agricultural Secretary Tom Vilsack announced on Tuesday that the federal government will help farmers, ranchers, small businesses, and communities by purchasing $170 million of pork, lamb, chicken and catfish for use in food banks.  This is enabled by the Emergency Surplus Removal Program, where the USDA can use funds to assist farmers and ranchers by purchasing meat.

So, the federal government subsidizes corn monocultures, which deplete the soil and reduce its ability to hold water, in order for it to mostly be fed to animals.  Then, when these especially drought-vulnerable plants are killed by a drought (which will become more common with droughts), the government resubsidizes the system by purchasing the meat of animals that became too expensive to feed because of rising feed costs.  Of course, emergency farmer aid is very important, and the drought has become a state of emergency in much of the Midwest.  But how much longer can we support such an unsustainable agricultural system that simply doesn't work in this environment?

By the way, as Grist's headline reads: "Pesticide-resistant insects add insult to drought injury".  Remember this post about scientists' concern about root worms developing a resistance to Bt Corn? It's happening! Here is an excerpt of the article that really confirms how a more balanced agricultural and food system would be more resistant to these environmental (and some unnatural) issues:

The sad irony is that farmers don’t need to transform themselves into organic farmers to keep their crops from being worm food — though that may be the best approach for developing more drought-tolerant fields. Historically, farmers managed corn rootworms through traditional crop rotations. These rootworms eat corn exclusively, so by alternating a corn crop with soy or another alternative, farmers would deprive the insects of food and the rootworm larvae would die off. This, by the way, is an age-old technique (originally part of the Native American Three Sisters agricultural tradition) that generates profits only for the farmer — not for seed companies.

Just this weekend, at the Summer Conference, I went to a workshop about edible forest gardens and we discussed the Three Sisters method of growing.  Even with the greater distance between corn stalks required for this polyculture, corn and beans grown together are both more productive than when grown individually!

That is the power of sustainable agriculture proved over the course of thousands of years.
Kristiane
Posted by CT NOFA at 11:37 AM