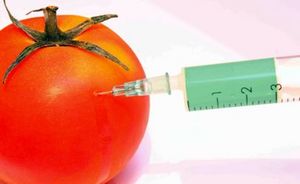 Yesterday's blog post about the California GMO Labeling Ballot Initiative showcases a very important potential step toward eventual GMO labeling across the country.  California has the highest GDP of any state in the nation, a GDP higher than many countries, so passing a labeling initiative there is likely to cause a domino effect culminating in mandatory labeling across the US.  Because of this, one of the nation's largest food lobbies, the Grocery Manufacturer's Association, has made defeating the initiative - called Prop 37 - their "single-highest priority".

According to an editorial on Food Safety News,

In a recent speech to the American Soybean Association (most soy grown in the U.S. is genetically modified), Grocery Manufacturers Association President Pamela Bailey said that defeating the initiative "is the single-highest priority for GMA this year."

You may not know the Grocery Manufacturers Association, but its members represent the nation's largest food makers -- those with the most at stake in the battle over GMO labeling; for example, soft drink and snack giant PepsiCo, cereal makers Kellogg and General Mills, and of course, biotech behemoth Monsanto.

According to state filing reports, so far GMA has spent $375,000 on its efforts to oppose the labeling measure, with its members adding additional out-of-state lobbying power in the tens of thousands of dollars.

Since Prop 37 poses a significant threat to many of the nation's largest food makers, corporations that make a lot of money from the production and sale of Genetically Modified foods, it makes sense that the lobbying group that represents those interests would be fiercely fighting back.  This backlash, however, is promising because it shows just how powerful Prop 37 really is. Lobbying groups might have a lot of money on their side, but no amount of money can compete with a large group of voices speaking out in unison.

Here in Connecticut we might not be able to vote on Prop 37, but that doesn't mean that we can't speak out in support of it.  The more people nationwide who show their support of mandatory GMO labeling, both publicly and to their friends and neighbors, the more likely those in California who can vote on it are to hear us.  After all, the Grocery Manufacturer's Association is a giant national lobbying firm that is currently influencing the outcome of the vote, regardless of whether or not it's employees can actually vote on the ballot itself.  So talk to those around you and be outspoken, because your voice makes a difference.  Let's show California that we support their right to know what's in their food!

Have an outspoken day!
-Melissa
Posted by CT NOFA at 11:42 AM