The Drought and Supporting Local Farming 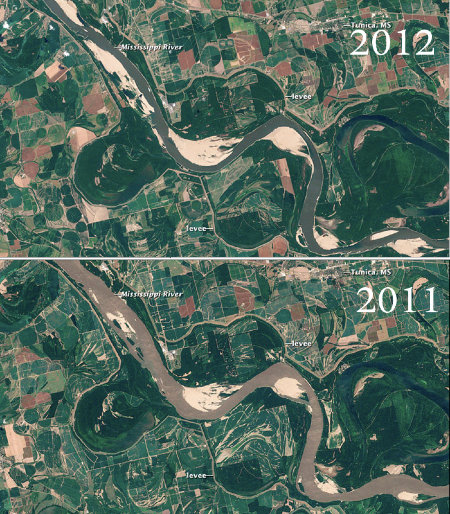 These photos were taken by NASA satellites almost exactly one year apart.  The bottom photo shows the Mississippi river in August, 2011 and the top photo shows the same section of river in August, 2012.  The large tan areas visible in the 2012 photo are huge sandbars that are exposed by the drought.  The drought threatens drinking water near the Mississippi River delta as a wedge of saltwater slowly moves up the river against the weakening current, and has also impacted shipping along the river since barges can no longer carry as many goods for fear of running aground. You can read more about this unprecedented situation here.

As we are all becoming increasingly aware, the drought has also had a huge impact on the corn crop in the US.  The USDA has released this map that details the extent of the drought, showing it's spread across much of the corn belt and other highly agricultural states.  However, the vast majority of the corn affected by the drought isn't used for direct human consumption - most of it is ultimately consumed, but in a processed or changed form.  The corn in question is mainly used for conventional animal feed, with some also going to create ethanol and additives for processed foods, like corn syrup.

This infographic shows that the drought won't greatly affect food prices in the grocery store since 86% of retail food costs are from third party fees like packaging, transportation, and processing.  This brings up another issue tangentially related to the drought - the issue of supporting your farmer. An average of around 20 cents of every dollar spent on conventionally produced food goes to the farmer, with slightly higher amounts going to farmers and ranchers raising livestock, and much lower amounts going to farmers who produce grains.  For a six pack of beer that costs $7.19, the farmer who grew the grain to produce it only got paid $.05.

In a conventional food system, the vast majority of the money you spend on your food supports transportation, packaging, processing, and marketing costs.  It's true that this money employs people in those industries, but a local food system creates many farming jobs near home while reducing fossil fuel consumption and increasing the nutritional value of the food grown.  This would connect people to their communities, making life better overall.  And in drought situations like the one we're in now, a local system made up of smaller more diverse farms growing many crops rather than monocultures would be much less susceptible to drought than the large one-crop farms we have now.

So what can you do?  The number one thing is to support your local farmer!  You can learn about farms, farmers markets, and CSA programs near you on our website.  Check them out, and make an effort to buy a significant portion of your food locally.  If you or someone you know is thinking about becoming a farmer, you can also check out our beginning farmer program which helps connect new farmers or people thinking about becoming farmers with the resources they need to become established.

As a society, we can take control of our food system and make ourselves less vulnerable to extreme weather while ensuring a better future for our children - a future of better nutrition, a healthier environment, and a greater connectedness to the local community.  A future where farmers are an important part of every community, and receive just compensation for their hard work.  It can be done, one farmer and one consumer at a time.

Have a great Thursday,
Melissa
Posted by CT NOFA at 9:34 AM