Footsteps Farm has been in Craig Floyd’s family since 1712.  Craig is a confident long-time farmer with a comprehensive understanding of his animals and their interaction with the land.  About 20 people came out for our workshop on May 21, and despite some drizzle, the workshop was informative and enjoyable.  Footsteps Farm is beautiful, the animals friendly, and Craig freely shares years of experience and knowledge about livestock raising.
“On a sustainable farm, everything has to have more than one purpose” – Craig Floyd

Craig buries chicken remains under high blueberry bushes because they are high in calcium.  And instead of drilling holes for fence posts, buckets weighed down with rocks and small holes drilled in the sides can run the wires around the perimeter of the enclosures.
Craig makes a compelling case for the benefits of allowing all kinds of insects living in his soil.  Dung beetles break down the cow manure and make holes in the soil for water infiltration.   Small cleared oak trees are cut into about 3 foot sections and piled in a log-cabin type of style.  He then drills holes and puts in mushroom plugs. 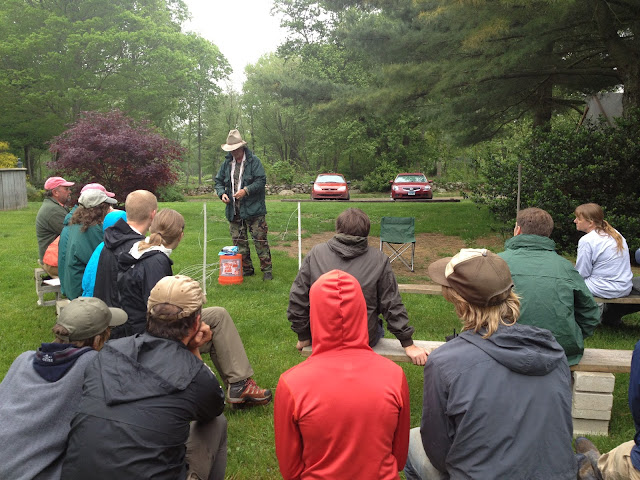 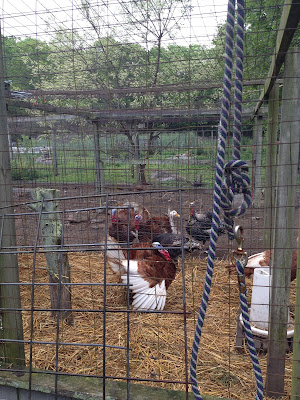 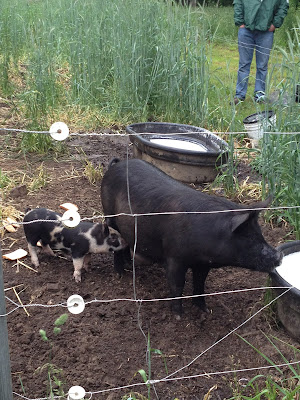 Heritage breed turkeys and a sow with her piglets!

“When you’re dealing with animals, if you’re always nice to them, you won’t have a problem”

Craig is “Certified Humane” which he felt was an effective way to “make a public statement” that a farmer’s meat is different from what one can buy in the grocery store.  His pigs and cows stay in large pastures surrounded by electric fences with a high enough voltage to keep the pigs in the enclosures.  For the pigs, only two lines at 9” and 18” are needed. When a number of his chicks were sick, they were prescribed antibiotics, which Craig hates to use.  Instead he gave his chicks apple cider vinegar which he said treated his birds.
It seems that happy healthy animals will at some point down the line, make for happy healthy consumers.  The difference (according to Craig) between a butterball turkey and a heritage breed is that heritage breed turkeys can run, fly and have thicker skin holding moisture in the meat.  Footsteps Farm has turned its focus to producing Spanish-style ham. He has dark pigs called “Large Shireworths”.  Dark animals have more muscle and Craig pointed out that lighter colored pigs can get sunburns while this is not a concern with dark pigs.  Craig also has an entire oak lot so that pigs can eat lots of acorns.  He said the tannic acid in acorns makes pig meat more flavorful.  To keep animals in wood lots he uses one of Joel Salatin’s tips, to tie the electric lines up with polypropylene rope around tree trunks. 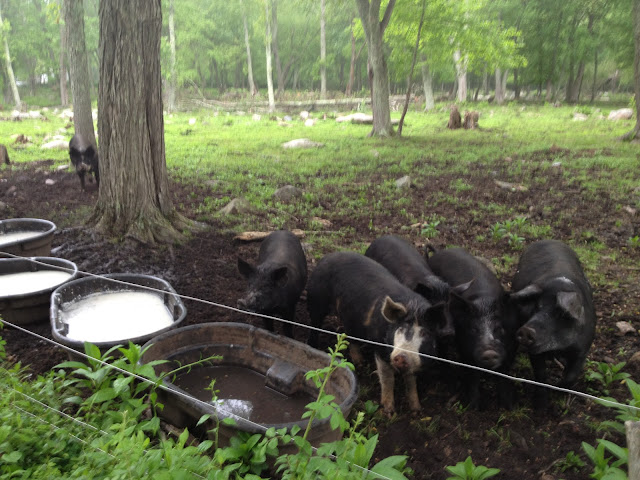 “We give thanks to the Lord for the chickens and we give thanks to the chickens for giving their lives”
An important element of Humane livestock production is the slaughter.  Craig explained that Footsteps uses slaughterhouses that have been approved by inspectors from Certified Humane.  He also showed us his own chicken processing facilities, which quickly slaughter, clean and package his chickens on sight so they do not need to take the stressful ride to a far away facility.  Craig said that an instructor at Johnson and Wales brings their students to Footsteps Farm to teach their culinary students how animals should be raised, and what defines quality meat.

After the workshop we had a beginning farmer dinner thanks to Sheryl who made everyone frittatas with their eggs and sausage!

We have a bunch of other workshops coming up! Visit ctnofa.org to see what we have scheduled.