"If I can't protect my child through individual actions, then I will through collective actions." - Sandra Steingraber, at the Pesticides Forum

This past weekend was Beyond Pesticides' National Pesticide Forum at Yale University in New Haven.  I was only able to attend on Friday evening.  The program kicked off with Pesticides 101 a panel that included our Executive Director, Bill Duesing, to discuss the basic issues surrounding pesticide use and the alternatives to pesticides (of which there are many). 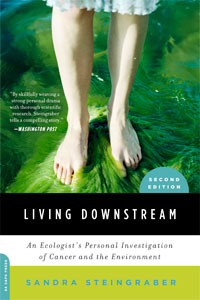 After the panel and some delicious dinner, the audience reconvened for the keynote.  Beyond Pesticides' Executive Director, Jay Feldman, presented an award to Nancy Alderman, president of Environment and Human Health, Inc. based in North Haven, CT and to Dr. Jerry Silbert, the Executive Director of the Watershed Partnership.  Congratulations to both of them and we echo Beyond Pesticide's thank you for their work here in Connecticut.
After this introduction, the keynote speaker Sandra Steingraber was introduced.  Steingraber is the author of Living Downstream an autobiographical and scientific book about the experience of having cancer, and her research about the causes of cancer linked to high levels of toxins in our environment.
Her newest book, Raising Elijah is about the challenges of raising a child in a time of uncertainty surrounding climate change and a massive species extinction.  She discussed at length the concept of Generational Inequity, a climate-change related injustice that is barely being discussed, since unborn children are unable to take part in international negotiations or the 99% movement.  Despite the conversation that is not happening surrounding this inequity, the World Health Organization identified climate change as the greatest threat to children today.  This is a powerful concept, because our actions no longer harm some disembodied next generation, they harm the children we already know and have become attached to. 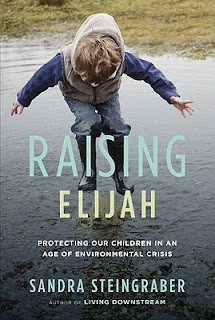 Steingraber has focused on our addiction to fossil fuels in this book as well.  She parallels our country's unsustainable and unethical investment in fossil fuels, to the investments made in slavery two centuries ago, more because of the economic instability   Given the popularity of natural gas as an "alternative" (but still fossil) fuel, she focused on the environmental and health concerns surrounding natural gas drilling.  I could write about the issues and criminal lack of regulation surrounding hydro-fracking for days, but the impacts on farming were especially notable.  Steingraber explained that the lands leased to natural gas companies are near dairies and farms that produce organic dairy products and heirloom wheat varieties.  All of the organic agriculture anywhere near these areas will most likely be compromised by the use of toxic chemicals for the drilling and by the air and water pollution associated with natural gas drilling.
Given the promise of energy conserving technologies and alternative energies, a refocusing of funding and research on these objectives can transition our country to mostly or all alternative energies.  Steingraber was a wonderful speaker, thank you so much to Beyond Pesticides for bringing her to Connecticut.
There is also a film of "Living Downstream" which is being shown at select film festivals, but keep your eye out for some public screenings near you.

I was unable to attend on Saturday, but a couple of our staff members did make it, and report that the other keynotes and workshops were excellent.
Posted by CT NOFA at 7:27 PM