5 Things You Need to Know About GMOs 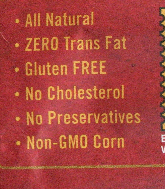 Michele Jacobson, a certified Clinical Nutritionist and the author of Just Because You’re An American Doesn’t Mean You Have To Eat Like One!, recently wrote an article entitled 5 Things You Need to Know About GMOs.  We've talked about this issue a lot because it deserves being talked about, and the second that we lose momentum over this issue is the second the bills currently pending nationally and statewide lose ground.  If you still haven't contacted your legislator in Connecticut, or haven't signed the Federal petition, here are some excerpts from Michele's article that might sway you to do so:

Why You Want To Avoid GMOs
What about the effects of GMOs on us after we’ve eaten them? Human studies are sparse to date, but there is a broad call for more research due to suspicion that foods made from GMO plants are linked to an increase in allergies. Indeed, “soy allergies skyrocketed by 50% in the UK, soon after GM soy was introduced.”2 Additionally, “scientists recently found GE insecticide in corn showing up in the umbilical cords of pregnant women.”

Where Does The Rest Of The World Stand?
“Unlike most other developed countries – such as 15 nations in the European Union, Japan, Australia, Brazil, Russia and even China – the U.S. has no laws requiring labeling of genetically engineered foods. Yet polls have repeatedly shown that the vast majority of Americans, – over 90% in most studies – believe GE foods should be labeled.”

Labeling in the EU is mandatory. Even some countries in need of aid have restricted the use of GM food. The United States is the only country in the world that allows the unregulated and unlabeled distribution of genetically modified and genetically engineered foods to be sold. What CanYou Do?
As it turns out, there is quite a bit you can do on a personal level to make your stance known.
1 - Avoid GM and GE foods to the best of your ability! It’s not so easy, as they have really infiltrated our food system, but by avoiding processed foods and paying attention to labels you can at least stand a chance.
2 - Buy 100% certified organic food. While guaranteeing your safety from genetically modified foods, this also makes a statement to producers that you don’t support GMOs in our food system. It’s simple supply and demand (or, in this case, demand and supply). Although it certainly isn’t the only reason to buy organic foods, it’s a great reason to start.
3 - Many states have bills pending the labeling of GMO products. Or, at JustLabelIt you can sign a petition for the FDA to require that all genetically engineered foods be labeled as such.
4 - Raise awareness! Talk about it to your friends, point out the No GMOs label on packaging, and pass this article along to a friend.

For more GMO information, please visit our website.  We all have a right to know what is in our food!  Please contact your legislator today and let your voice be heard!
Posted by CT NOFA at 4:27 PM