By  now you have probably heard of Mayor Michael Bloomburgs plan to amend the New York City Health Code in order to establish 16 ounces as the maximum size for sugary drinks.  This would only be for containers served for immediate consumption like restaurants or theaters. The plan has drawn a great deal of criticism, and the CT NOFA staff weren’t sure how we felt about it.

On one hand is the argument that adults can and should make their own decisions, especially about their own food consumption (as Jon Stewart pointed out on the Daily Show).  Also, the ban does not actually stop anyone from drinking more than 16 oz of soda, they can just buy a second drink.  The main argument is that, consumers must learn about nutrition and how to make these healthy choices, instead of having someone legislate their behavior.

On the other hand (which I'm starting to lean towards as I read more) is that portion sizes are huge in the United States, and these unlimited portion sizes are probably the greatest contributor to America's obesity epidemic.  The issue is not as much our food choices (every culture has some delicacies and foods that are unhealthy, but delicious).  Take for instance, this infographic from the Center for Disease Control: 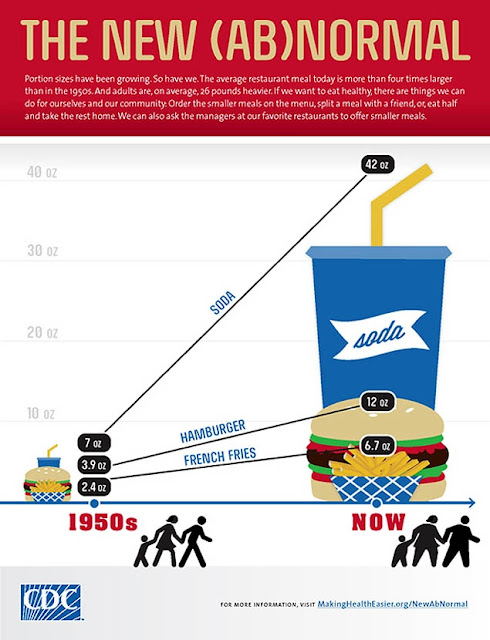 Even people who are very careful about their consumption and aware of proper portion sizes, just don’t have the self-control to “save half their meal for later” or “share with a friend” - the recommended methods to beat big portions.  According to this column in the Huffington Post (and the infographic above), sodas are six times larger than they were 60 years ago, and Americans consume 200-300 calories more per day than 30 years ago.

Whether the obesity epidemic is addressed with more aggressive education initiatives or legislation (preferably both), Bloomberg's impatience and desire to take immediate action is an attitude more politicians should have.  Political affiliation and personal health decisions have little to do with the truth that drinking large amounts of soda can cause weight gain, weight gain can lead to obesity, and obesity is a serious health condition.

This Report “Economic Causes and Consequences of Obesity”published in Annual Reviews in 2005 found that: “Much of the rise in energy intake is related to increased consumption of carbohydrates. In 1976–1980, adult men and women aged 20–74 years consumed daily 1039 and 700 kcal of carbohydrates, respectively. In 1999–2000, these numbers increased to 1283 and 969 kcal (10). Beverages, particularly fruit and soft drinks, are also responsible for a surprising number of calories. In 1997, the average American consumed 53 gallons of soft drinks and 17 gallons of fruit juices or drinks, a 51% and 40% increase since 1980 (55).”

A press release from Mayor Bloomberg’s office explains “Obesity is the only major public health crisis in America that is getting worse and nearly 60 percent of New York City residents are currently overweight or obese. In addition to the toll on health, the costs to the public are steep: in New York City $4 billion is spent annually on health care costs related to obesity. The Mayor’s Task Force on Obesity has proposed initiatives – including limiting the size of sugary drinks, significant contributors to the epidemic – with the goal of reducing the percent of obese adults by 10 percent and children by 15 percent over the next five years. “

Also, as this debate plays out, keep in mind the American Beverage Association's political and economic power. As Nancy Huehnergarth points out in her column in Huffington Post, the ABA spent close to $13 million in New York in a six-month period in 2010, lobbying against a proposed penny-per-ounce statewide soda tax.  No one wants there to be large soda sizes available more than soda companies themselves.