Farm Subsidies and the Farm Bill 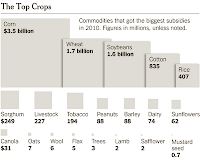 The new 2012 Farm Bill could move onto the Senate floor as early as this week, promising to shape federal agricultural policy for the next 5 years.  The bill allocates nearly a trillion dollars of funds into farm subsidies, conservation programs, and food stamp aid, with the vast majority of the funds that are directed to subsidies going into the pockets of large farms growing commodity crops.  When you think of farm subsidies, your initial reaction might be a negative one, conjuring up visions of large corporations draining taxpayer dollars into unsafe and unsustainable farming practices that hurt workers, the environment, and the health of the nation, while simultaneously diverting funds away from small growers who need the money the most.  But the thing is, farm subsidies were originally meant to help those same small farmers that are hurt by them today.  An editorial by Robert B. Semple Jr. in the New York Times explains:

The subsidies have always been controversial. A mix of direct payments, price supports, loans, subsidized insurance and disaster relief, these subsidies provided protection for millions of farmers in the New Deal and afterward against the vicissitudes of the weather and the market. But in recent years, they have mainly lined the pockets of big farmers of big row crops who don’t need help, while ignoring the little guys who do.

So the original intent of farm subsidies was to help small farmers to make a living in order to ensure that enough food was produced in any given year to adequately feed the nation.  But as a multitude of small growing operations began to merge into a few drastically larger ones, subsidies began to undermine the very goals they had been put in place to achieve.


The story of modern agriculture in this country is a story of concentration, of huge subsidies flowing to relatively few farmers who grow a handful of row crops — corn, wheat, soybeans, cotton and rice — in a dozen or so Midwestern and Southern states. Because farm subsidies, old and new, have been tied to production, those cultivating the largest acreage get the biggest payouts. The top 20 percent of recipients from 1995 to 2010 got 90 percent of the subsidies; the bottom 80 percent just 10 percent. Many farmers — well over half the total, by some estimates — get no help at all.

It's time we made a concerted effort to promote local small scale production of the nutritious fruits and vegetables we need rather than siphoning our tax dollars into the hands of a small number of giants growing less nutritious commodities.  It's time we remembered as a nation what farm subsidies were originally put in place to do.  Please do your part to shift agriculture back to sustainability.


What You Can Do