The CT NOFA Board voted on  March 18 to remain plaintiffs in the case against Monsanto through the appeal process! Read the press release from the Public Patent Foundation:

Battle over Farmers' Rights Against Monsanto Continues to Brew 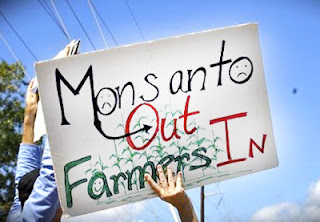 
"Farmers have the right to protect themselves from being falsely accused of patent infringement by Monsanto before they are contaminated by Monsanto's transgenic seed," said Dan Ravicher, Executive Director of the Public Patent Foundation (PUBPAT), a not-for-profit legal services organization based at Benjamin N. Cardozo School of Law that represents the plaintiffs. "Judge Buchwald erred by denying
plaintiffs that right and they have now initiated the process of having her decision reversed."
The original complaint in OSGATA et al v. Monsanto was filed on March 29, 2011. In July, Monsanto filed a motion to dismiss.  Plaintiff lawyers at PUBPAT then filed a rebuttal brief on August 11, 2011. Judge Buchwald called for oral argument on the motion to dismiss, which was held in Manhattan on January 31, 2012.  The judge'sdismissal ruling was issued February 24th and plaintiffs were given thirty days in which to file their Notice of Appeal.
"Farmers are under threat.  Our right to farm the way we choose, and to grow
pure organic seed and healthy food on our farms for our families and for our customers is under assault," said Maine organic seed farmer Jim Gerritsen, President of lead Appellant OSGATA. "We are honor-bound to challenge an erroneous ruling which denies family farmers the protection the law says we deserve. We're not asking for one penny from Monsanto. Ultimately, our fight is for justice and is waged to defend the right of the people to have access to good and safe food."
The Plaintiff/Appellant group is comprised of individual family farmers, small and family-owned seed companies and agricultural organizations.  They are all organic or committed to farming without using genetically engineered seeds, and have no desire to ever farm with Monsanto's patented GMO technology.  However, they are fearful that Monsanto seed will trespass onto their farms and that the resulting contamination of their crops will be viewed by Monsanto as illegal 'possession' resulting in patent infringement allegations. Monsanto's harassment of family farmers is well known in farm country, the biotech seed and chemical giant has one of the most aggressive patent assertion agendas in U.S. history. Between 1997 and 2010, Monsanto admits to filing 144 lawsuits against America's family farmers, while settling another 700 cases out of court for undisclosed amounts and imposing gag orders on farmers. The farmers' fears were heightened when Monsanto refused to provide a legally binding covenant not to sue, signaling Monsanto's intention to maintain their option to sue innocent family farmers in the future.
"America's farmers deserve to be protected under the law from the unwanted genetic contamination of their crops by Monsanto's flawed genetically engineered seed technology," said David Murphy, founder and Executive Director of Food Democracy Now!, an Iowa-based national advocacy organization of more than 300,000 members. "These farmers have no desire to use Monsanto's GMO seeds, yet they are forced into the untenable position of losing their right to farm in the manner in which they choose, face legal intimidation and the loss of economic livelihood, all because America's legal system has failed to adequately protect them from the real threat of genetic trespass that is inherent as a result of Monsanto's patented GMO seeds and the natural biological functions of cross pollination from wind, insects or animals."
Posted by CT NOFA at 11:31 AM