Wal-mart's threat to the food system

"Eaters beware: Walmart is taking over our food system" by Stacey Mitchell, on Grist.com brought to light the power of Wal-Mart in the American food system.  I knew Wal-mart was becoming a considerable force in conventional and organic markets, but had not realized their pervasiveness in our food system, and how rapidly their presence has grown.

I won't ruin the article for you (you should read it), but here are some interesting facts I learned:
Also this little statistic is some real food for thought: Walmart has also been linked to rising obesity. "An additional supercenter per 100,000 residents increases ... the obesity rate by 2.3 percentage points," a recent study concluded. "These results imply that the proliferation of Walmart supercenters explains 10.5 percent of the rise in obesity since the late 1980s." 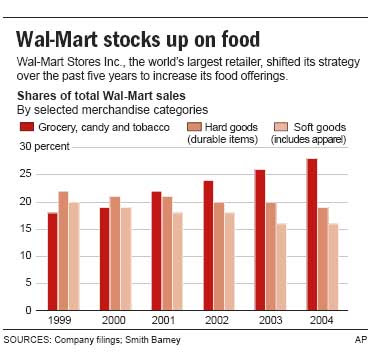 This is a great reminder that there are many elements to the sustainable food debate - we aren't just looking for local and organic, we are looking for decentralization and where it is possible, completely removing the "food provider" middle-man part of the food supply chain that insures farmers are underpaid while customers over pay.