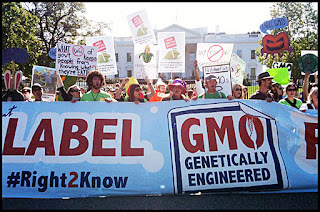 Right now the only way to know for sure if the food you're eating is GMO (Genetically Modified Organism) free is to buy organic.  Organic produce is prohibited from containing any genetically modified material, and organic livestock may not be given any genetically modified feed.  Maria Rodale, CEO and Chairman of Rodale, Inc., posted an article yesterday on the Huffington Post that describes the dangers of GMOs and the resulting need for product labeling.  Maria sites three studies listed in her article and summarizes them concisely: "One reports that GMOs survive in our bodies -- they aren't killed in the stomach, as some have suggested, but travel to the intestine where they remain active in the body. Another study reports that we are exposed to these GMOs, not only from the GMO foods themselves, but also from eating animals that eat GMO foods. And finally, animal studies reveal that these GMOs may be linked to disease.

The Just Label It campaign calls for mandatory labeling of GMO ingredients. The NOFA Interstate Council, NOFA RI, NOFA-VT, NOFA-NY and CT NOFA have joined the Campaign and are also plaintiffs in a lawsuit against Monsanto to protect organic producers from the ramifications of GMO contamination.  As part of our GMO Activist Program, we are building a list of members interested in anti-GMO activism who can help send letters to the FDA or locally organize to advocate for state labeling regulation in which Rep. Roy and the Ledgelight Health District have led the way. Please e-mail Kristiane if you'd like to be added to the list as we coordinate more GMO activism activities.

Check out our webpage to learn more about what you can do to ensure that you know what's in your food.