Market Forces from the Union of Concerned Scientists 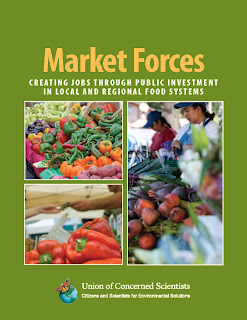 http://sustainableagriculture.net/wp-content/uploads/2011/08/market-forces-report.pdf
This report from the union of concerned scientists finds that more regional and local food systems create more jobs than the industrial food system. The numbers of farmers markets nationwide more than doubled from 2000 to 2010, and allows customers to invest directly in farmers and in their local economies.
The report explains that regional food systems reduce the social cost of food when compared with the private production costs, subsidies and externalities of food products.  Regional markets increase the competition in markets which have become increasingly monopolized by big agriculture corporations.  Local agriculture also localizes economic impacts of local food systems can be greater than those of conventional markets, because if food is purchased directly from a farmer than most of the revenue remains is retained in the area and this helps to stabilize local economies.
The report found that the Farmers Market Promotion Program could create 13,500 jobs nationally over a five-year period, if reauthorized, by providing modest funding for 100 to 500 farmers markets per year (out of over 6,000 markets nationally). 13,500 jobs isn't much, but when added to the benefits of strong local economies, access to healthy food, and reduced food transportation costs, it seems like a no-brainer.
Posted by CT NOFA at 11:40 AM