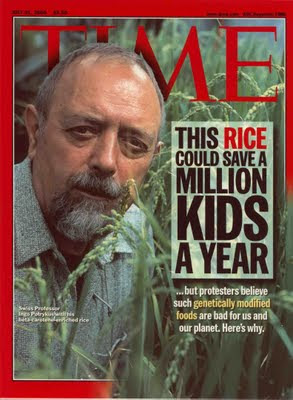 How many times have you heard the argument that we need GMOs in order to feed a growing population and take care of starvation and malnutrition? It seems to be the main argument in favor of genetically-modified foods.  This is frustrating for proponents of organic agriculture, since many studies show that over time, organic agriculture and sustainable farming practices have higher or equivalent yields to conventional agriculture.  An article in Huffington Post yesterday by John Robbins asked that exact question: “Can GMOs Help End World Hunger?”
His article looks at the actual efficacy of golden rice, since it was first publicized in Time magazine.  Golden rice is engineered to produce beta-carotene which can be converted to Vitamin A by the human body.  This became the main focus of the biotech industry’s advertising, that their research and products could end world hunger.
However, as John Robbins discusses in this article, golden rice does not grow well in the areas with high rates of malnutrition and hunger . . . well not without the help of pesticides and herbicides.  Additionally, malnourished people are not able to efficiently absorb Vitamin A in this form.  Finally, the company which engineered golden rice, Monsanto, has also genetically modified the seeds so they cannot be saved from year to year, and will need to be purchased over and over again by the low-income farmers in developing countries.
Once again, anti-GMO activists are able to demonstrate that they are not “anti-science” or “anti-solutions” but that they are anti-business.  There is enough food to feed the world, the fact that it is concentrated in the hands of just a few corporations in developed countries is already the main problem.  To embrace one type of rice patented by one company as the worldwide solution would be the agricultural equivalent to the atomic bomb. Definitely check out the article on the Huffington Post site, it's a very well-written, concise explanation of the holes in the "world hunger" argument in favor of GMO production.
Posted by CT NOFA at 12:35 PM