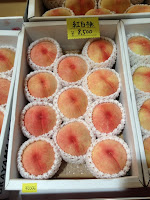 Rice is an obvious example here, but there are others. My town is surrounded by rice fields, and in my travels by train I've noticed that a large percentage of arable land that isn't being used for buildings in any given town is being used to grow rice. I don't know what the spray schedule is for rice here, but I have yet to witness any pesticides being sprayed. Mostly, I just see people out in fields in ones and twos tending to the rice. For the most part, hills and mountains are left entirely out of the equation, both for rice cultivation and for any human habitation at all. It's astonishing how much Japanese construction has remained in the river valleys despite a large population density.

Difference: Japanese towns are all about private and community gardens 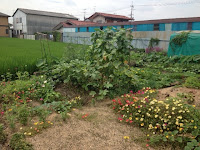 These are photos I took near my apartment in Hayashima. You pretty much can't go anywhere in town and be out of sight of someone's vegetable garden. It has transformed the town with the highest population density in the prefecture into a peaceful and seemingly rural place. I live ten minutes from a city the size of Boston, but you would never know it walking around town. Every week or so someone brings in the spoils of their harvest to share with everyone at work, and the elementary and middle schools grow food and flowers on campus. Gardening and eating food that you grew yourself is as much a way of life here as large swaths of rice fields.

So there are certain crops in Japan that are grown in large quantities in monocultures, (possibly) with the aid of pesticides and fertilizers. Some foods are also shipped from far away, although often from within the country. It seems like Japan also has robust local and regional food economies. So far, I'm impressed by this country's food system, and am excited to learn more as I spend more time here. I'll make sure to report my findings as they arise. In the meantime, please share your comments and insights!

Stay tuned for another post later about diet and health in Hayashima, and the rest of Japan. As you might imagine, the diet here is very different from that in the United States!

Have a great day (night for me)! Oyasuminasai!
Melissa
Posted by CT NOFA at 8:39 AM