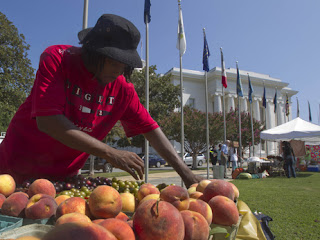 A new article from NPR's food blog, The Salt, sheds light on the truth behind the profitability of local food.  According to the news giant, "It's easy to think of local food as a diversion for people with plenty of time and money — something that could never be a major source of food in a globalized world. But the number $5 billion might change that perception."  According to a new analysis by the US Department of Agriculture, farmers are selling $4.8 billion a year in fruits and vegetables, mainly to restaurants and supermarket chains.  This is the first time the USDA has included sales to those markets in their analysis, and it shows that there is a lot of room to increase demand further.  In fact, the USDA's study didn't include two key markets, schools and prisons, that have become increasingly popular among local food growers, and that have the potential to greatly increase their overall revenue.

Ultimately, the number 5 billion is small potatoes (about 2 percent) compared to the much larger sale of commodity crops like soybeans and corn, but the numbers show that local food is a growing industry that has the demand to not only remain sustainable but also become increasingly popular over time.  You can read NPR's full article here.

The best thing any of us can do when shopping for food is to buy local.  Purchasing locally produced crops is great for your health, supports your local economy, and helps make our local economies less dependent on large commodity crops.  Do yourself and your community a favor and buy local, or even start your own garden for the freshest food possible.

Have a great Tuesday!
-Melissa
Posted by CT NOFA at 8:58 AM