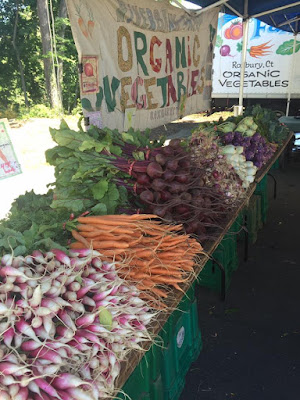 Before the USDA assumed responsibility for accrediting organic certifying agents nearly 15 years ago, CT NOFA, and other NOFAs, had their own certifying bodies run by volunteer farmers and advocates. Farmers seeking to become a NOFA Certified Organic Farm would fill out an application and submit it to the NOFA organic certification committee for consideration.

David Blyn was a member of the committee that would meet in the Hartford area to review applications, send inspectors to visit farms that made the cut, then review and certify organic farms. “The certifications didn’t cost very much” says Laura McKinney, who served along with David Blyn as a certifying agent until federal government took over.

“The big difference was there wasn’t a big audit trail back then. Now there’s a much bigger audit trail, so it’s more onerous for the farmer” says McKinney. “For Riverbank Farm, it’s not a big deal, but a lot of small farms decided it wasn’t fun anymore.” Organic certification is important to Dave and Laura and the farm is Certified Organic by Baystate Organic Certifiers in Mass. “A lot of people get confused. If you don’t have it; you have to explain a lot more” says Laura. 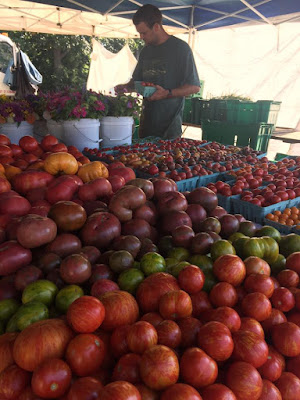 Dave started Riverbank Farm on a lark in 1991. He was a carpenter at the time and bought the place thinking he was going to use the barn, the only functional building on the property. After reading an Eliot Coleman book and working on a neighbor’s farm for a season, he started farming an acre. “Once you start, it’s hard to look back” says Dave.

Meanwhile, Laura decided to head our East after graduating from UC Santa Cruz and working with women in agriculture in India. A relative knew Dave, and she went to help him at the farm, but soon decided to return to UC Santa Cruz to do their 6 month apprenticeship program to learn how to run a farm. Laura felt they needed to develop some systems on the farm and become diversified because so many things can go wrong. A greenhouse was added, they did more plant propagation, and added cut flowers to the mix. “Every year you’re kind of tweaking the system to make it more efficient and meet market demand” says Laura. 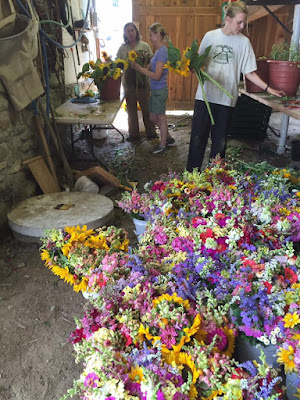 A CSA was not an attractive option for them though. The farmers’ markets were where they made most of their money, including the New Milford market that Dave helped found. Running a CSA became stressful after they had their first child. A farm stand on the property isn't feasible because they're on a dirt road. Instead, the community can buy their organic produce and line of vegetarian prepared foods in town seven days a week at Roxbury Garage.

Diversifying the farm also includes having apprentices, and education and training have been a big part of the farm. “We have a good crew who’s interested in starting their own farm” says Laura. The farm has been hit with so many natural disasters - blight, flood, fire - and as more and more things happened they kept asking how they could continue to diversify. 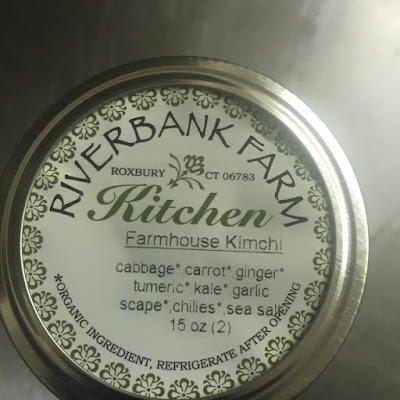 Their commercial kitchen, now in its ninth year, was partially funded by a state grant. “It’s a great way for people who aren’t sure about cooking to enjoy our food and it ensures bumper crops are used” says Laura. The kitchen is staffed by locals who are into cooking and food and turns out pickles, sauces, hummus, sauerkraut, dips, and more seasonal specialty foods from May through November.

Dave and Laura have a holistic philosophy centered on feeding the soil and creating a rich, biodiverse habitat to support nature so it supports the farm. Dave says “whenever anyone eats food from the farm they become part of the farm.” “We love what we do” says Laura. “There’s a lot of hardship, but in the end it’s a great place to raise kids."