For August, I'm taking a vacation from the Gleanings essay to highlight a few long time CT NOFA members and their farms.

On an absolutely beautiful early August Sunday, the long running New Milford Farmers Market sponsored its First Annual Western Connecticut Farm Crawl, an open house at many of the farms which sell at the market. Three of the farms are certified organic.  I got to two of them and one other.  I learned a lot.

David Blyn began growing vegetables on a half acre of Riverbank Farm in 1991, during a downturn which slowed his carpentry business.  His bottom land along the Shepaug River in Roxbury responded well and he was hooked.  (I remember another long time farmer and  CT NOFA member Mel Bristol of Bloomingfields Farm being astounded at the amount of produce David brought to the New Milford Farmers market in the early days and that he sold it all at $1 a pound.)

In 1996 David met Laura McKinney who had just completed the sustainable agriculture program at the University of California at Santa Cruz.  (That program is now taking applications for scholarships for its six month program which begins in April, 2016.  Steve Munno, CT NOFA board member and farmer at Massaro Farm in Woodbridge is another graduate of that program.)

Now, nearly twenty years later, David and Laura have three daughters and sell at seven summer and two winter markets. David says their oldest daughter who is 13 can handle a market by herself. David reminisced about the time when he was on the CT NOFA certification committee and the various farmers who were involved in that effort.  A special shout out to Wayne Hansen, who was the inspector, and Guy Beardsley, both of whom are still growing certified organic vegetables. (CT NOFA certified organic farms in the state from the late 1980s until the USDA took over organic in 2002.)
Here are some pictures of Riverbank farm from yesterday.

Then I visited Fort Hill Farm in New Milford, run by Paul Bucciaglia and Rebecca Batchie. Paul grew up in Naugatuck, CT, studied agriculture at Penn State before beginning graduate studies in plant biology at the University of Minnesota.  However in the mid 1990s, he worked on an organic farm near the Twin Cities and decided to leave the laboratory for small scale organic farming.  Beginning in 1999, Paul apprenticed at Brookfield Farm CSA in Massachusetts and then managed Holcomb Farm CSA in Granby, CT for two years before leasing 20, flat, sandy acres of protected farmland in New Milford owned by the Sunny Valley Preserve, part of The Nature Conservancy.   (Sunny Valley owns and leases out a number of farms in the area. They specifically wanted an organic farm when they connected with Paul in 2002.) Paul started that fall by plowing four acres of the larger, long time hay field. That was the beginning of his continuing work to improve the sandy soil with compost and minerals. (He is currently focusing on the role of silica in growing healthy Cucurbits.) Rebecca, with a background in horticulture that leaned toward vegetables, joined Paul on the farm in 2011 after earning a degree in Critical Social Thought from Mount Holyoke College. Their son Luca just turned two.

Both Riverbank and Fort Hill farms are very involved in creating the next generation of successful vegetable farmers. Their workers, interns and apprentices have gone on to start or work on many other farms.  Mark Palladino of Wild Carrot Farm is one example I am familiar with.  He went from an office job dealing with numbers to being a successful certified organic vegetable farmer after working at Riverbank Farm. Mark farmed on leased land in Canton for a number of years before finding his current location in Bantam.

Here are some photos of Fort Hill Farm. 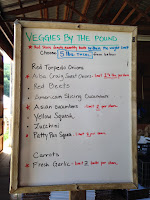 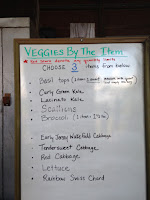 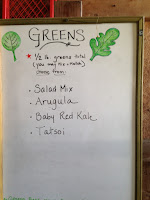 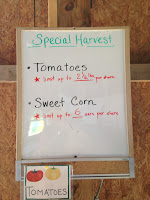 Paul didn't talk much about his CSA. It is so popular and his customers are so loyal that the wait list rarely opens up and it can take years to become a member once you are on the wait list.  His distribution strategies, vegetable choices and growing skills are very attractive.  These signs from the distribution shed provide examples of the farm's approach and show which vegetables are currently available. 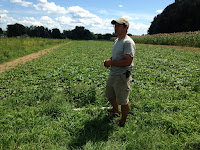 Paul in front of his sweet potato field.  The crop does well in the farm's sandy soil and is popular with shareholders.  Notice the sweet corn on the right. Sweet corn and strawberries are two crops his shareholders also really like.  When Paul and CT NOFA hosted an organic IPM workshop at Fort Hill some years ago, he mentioned that marketing his corn through the CSA was part of his organic IPM strategy.  His customers really like organic sweet corn and are willing to tolerate the few worms that get past his organic control using Bt. 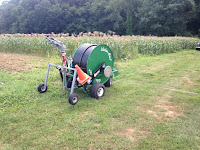 Because of sandy soil and limited well capacity, they irrigate in a variety of ways.  This water reel is used at night. In the heat of the day, drip irrigation is used on mulched tomatoes.

Paul recommended that I visit Happy Acres Farm in Sherman next. Mel and Diana Bristol and other friends who live in Sherman had told me how excited they were that their town had purchased the nearly 100 acre Happy Acres Farm and had accepted a proposal from two young men to raise grass-fed beef in order to maintain and improve the beautiful valley farm with land along both sides of Route 39 north of Sherman center and south of the Bristol' s farm.

I didn't know until I read this article from across the Atlantic in The Guardian that these two young men had met at Riverbank Farm. At the time environmental writer John Motsinger was volunteering to learn more about farming and Adam Mantzaris was making the transition from biomedical engineering to farming, inspired by Michael Pollen's The Omnivore's Dilemma.

I had met John and Adam earlier in the year when they consulted with me about organic certification at CT Farm Risk Management's One-on-One advising sessions. These sessions are another important resource for new and any other farmers who have questions about regulations, legal matters, land transfer or other issues and want to talk privately with an expert.  These free sessions are scheduled in locations throughout the state for late winter or early spring if funding is available. Check here for more information later in the year.


A woman's perspective is so important for a farm. Each of these farms involves strong women; the men spoke respectfully of their roles.  I was very happy to see Sarah at Happy Acres who I'd met many times when she was Guy Beardsley's best worker at Guy's EcoGarden in Shelton. (You can hear Guy at noon on The Organic Farmstand, the first and third Thursday of each month on WPKN, 89.5 from Bridgeport or at WPKN.org) This year Sarah established the vegetable garden at Happy Acres.  Sarah also worked at Riverbank Farm for a while.  Vegetables and grass fed meat are sold at Happy Acres farmstand.  Meat is also sold at several farmers markets.

Here are some photos of Happy Acres Farm 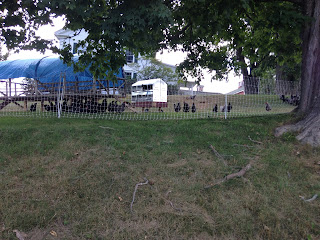 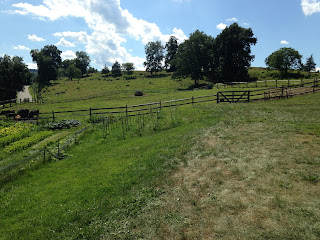 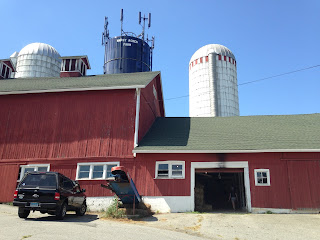 The day before the farm crawl, Suzanne and I were invited to a friends and family blessing for Carole Miller, a very long time CT NOFA member and owner of Topmost Herb Farm in Coventry. In 2001, Carole opened her beautiful farm to CT NOFA for its Taste! Organic Connecticut Event, which included an organic farmers market, local organic food, cooking demonstrations, classes and music.  It was one of the first destination markets in the state and one of the first public outings for the Big Green Pizza Truck which started a continuing trend in this state.  Carole provided the venue for seven more years, each one hosting 700 to 1000 happy people.  Taste! moved to Manchester Community College for two years until the growth of exciting weekly farmers markets including organic farmers made Taste! less important.


Carole is an important organizer, volunteer and vendor at the Coventry Regional Farmers Market. On this TV talk show, Carole reminisces about growing up near her current farm, how she got interested in herbs and organic methods.

It is not easy to rebuild our current food system which is broken in so many ways: dependent on lots of fossil fuels and dangerous chemicals, on very long distance transportation and on very low paid often immigrant labor. These young and not so young Connecticut farmers provide hopeful examples of the ways we can create holistic, organic solutions to feeding ourselves with healthy food at fair prices. There is little that is more important for our future.