Food and the Environment

Should we take the environment into consideration when we eat? 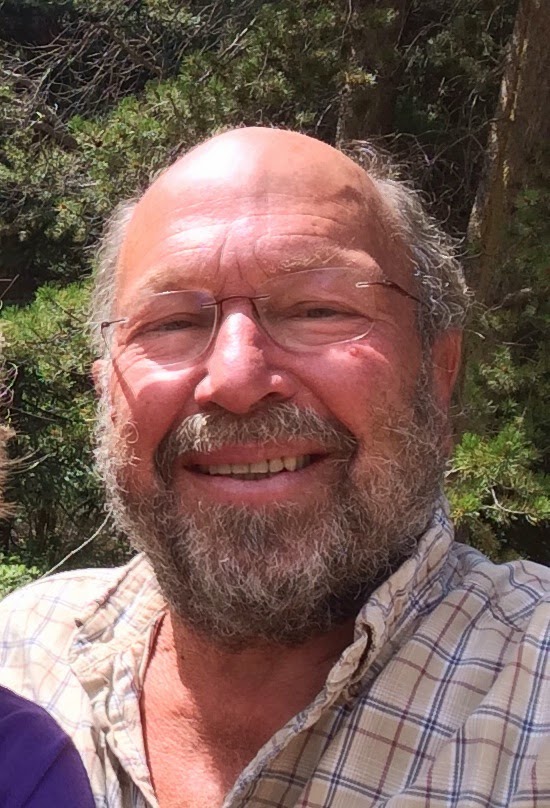 The good news is that recent research and traditional knowledge point to ways of growing and eating that produce health both for the environment and for people.
For the first time ever, the advisory committee charged with creating the 2015 version of USDA's Dietary Guidelines was considering including environmental costs in writing those guidelines. Sounds like a good idea to me.  But not to everyone.

Language slipped into the Cromnibus Bill, that massive piece of legislation (a.k.a., the agreement) that Congress cobbled together quickly (!) and passed in December to keep the government running, squashed any hope of connecting food choices with environmental consequences:

... The agreement directs the Secretary to only include nutrition and dietary information, not extraneous factors, in the final 2015 Dietary Guidelines for Americans.

Those extraneous factors are identified in the bill language as "agriculture production practices and environmental factors." Note 1.

If the government can't tell us about how our food choices effect the environment, we inherit that responsibility.

Synthetic nitrogen fertilizer is especially damaging to the climate and the rest of the environment because of its energy costs and its negative effects on soil carbon and biodiversity. Lehner reported that two thirds of nitrogen fertilizer is wasted, that is, not used by crop plants.  That excess ends up in surface and ground water where it causes great damage.

We've known since at least 1971 when Diet for a Small Planet was published, that eating meat in the quantities we do in this country is not sustainable, or healthy, or socially just in a hungry world. (According to Wikipedia, its author, Frances Moore Lappe, "argued for environmental vegetarianism, which means choosing what is best for the earth and our bodies — a daily action that reminds us of our power to create a saner world." Just because an idea is decades old doesn't mean it's not valid anymore.)

Lehner said that the choice to eat less meat was one way people could effect a positive change.  He noted that Meatless Monday was begun by the government during WW l to support the troops. It was revived during WW ll.  But recently when the USDA mentioned participating in Meatless Monday as something its employees could do for their health and the environment, the beef industry went ballistic. The USDA quickly removed that suggestion from its web site.

I suspect that the meat industry, its lobbyists and Congresspeople are also behind the limitations on the Dietary Guidelines Committee. Additional animal-agriculture friendly language in the Cromnibus bill prohibits the government from requiring farmers to report “greenhouse gas emissions from manure management systems" or requiring ranchers to obtain greenhouse gas permits for “methane emissions” produced by cows.  According to the EPA website “Globally, the agriculture sector is the primary source” of methane emissions. Methane is a much more powerful greenhouse gas than carbon dioxide.

The meat industry includes most of industrial agriculture since it rests on a foundation of genetically modified grains treated with Roundup and other herbicides, insecticides and chemical fertilizers, as well as large-scale linear systems to feed its animals.

In contrast, think about what happens when food waste is composted and used as fertilizer.  Two problems become a solution.  Aerobic composting greatly limits methane release and the resulting product is a much less polluting fertilizer.

As a bonus, compost stimulates growth of soil organisms and increases soil biodiversity.  This pulls carbon from the air, through plants and into the soil.  There, much of the carbon becomes part of long-lasting humus, sequestering carbon and fighting climate change.  A side effect is vastly improved water availability.

The positive results from stimulating soil life and increasing biodiversity through organic and agroecology methods provided the hopeful message at the "Restoring Ecosystems to Reverse Global Warming Conference" at Tufts in November.  Scientists, activists, farmers and ranchers from many countries described their successes.  You can see videos from the conference here. Although there was lots of inspiration and knowledge from the researchers and practitioners, a young woman restorative-grazing educator from Africa and a Lakota grandmother from the Cheyenne River Homelands in South Dakota each brought the audience to its feet.

This knowledge is not new. Civilizations rise and fall based on how they treat the soil and the environment.  The dominant agriculture in this country treats soil and the environment so badly that they want to hide the facts. If soil health and biodiversity are important, we need to use less chemical fertilizer and fewer herbicides.  If the climate is important, we need to eat less meat.

Industry resists because it must: to retain its profits and the status quo.  But for more than 100 years, people who have been paying attention have been saying that we need to work more closely WITH nature, using nature's methods- increasing biodiversity and eliminating waste by recycling everything.

Organic pioneers such as FH King, Sir Albert Howard and Louis Bromfield learned from the land management wisdom of traditional cultures, now often called agroecology.  Their writings inspired others such as J. I. Rodale, Eliot Coleman and Fred Kirschenmann.  See more about this history in NOTE 2.

This 100-year thread of agricultural wisdom continues to inspire many people today. These visionaries described organic agriculture before it was even named.  Their methods address issues such as climate change, nitrogen pollution and biodiversity loss before they became issues.

Lose-Lose or Win-Win; you Choose

Moving forward, we can keep going with the most environmentally destructive food and agriculture system the planet has seen and keep the effects hidden by Congressional mandate. This food provides low-cost raw materials for the meat and processed food industries.

Or, we can use proven and sustainable, organic and ecological methods which work with nature and produce food that is healthier for us and the planet. Globally, most food is produced on small-scale farms using organic or agroecology methods.  In this country sales of organic products climbed 83 percent between 2007 and 2012. 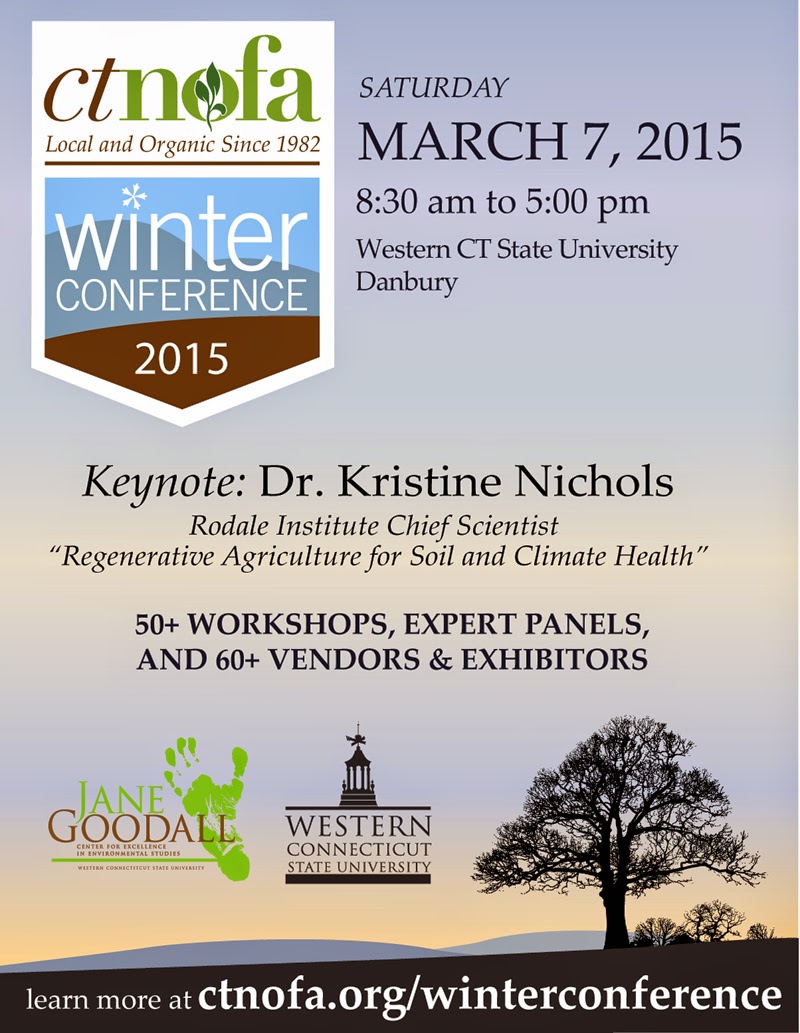 Our food choices can be powerful tools for change. But we must speak out and take action. Grow some of your own food, join a CSA, shop at farmers markets, simplify your diet, cook more (Michael Pollan, How Cooking Can Change Your Life, here) help with a school or community garden or create a community farm.  Sign up now for the CT NOFA Winter Conference on March 7 to learn more about all of this.  If you are going to grow some food this year, check out the NOFA Bulk Order for good prices on supplies. 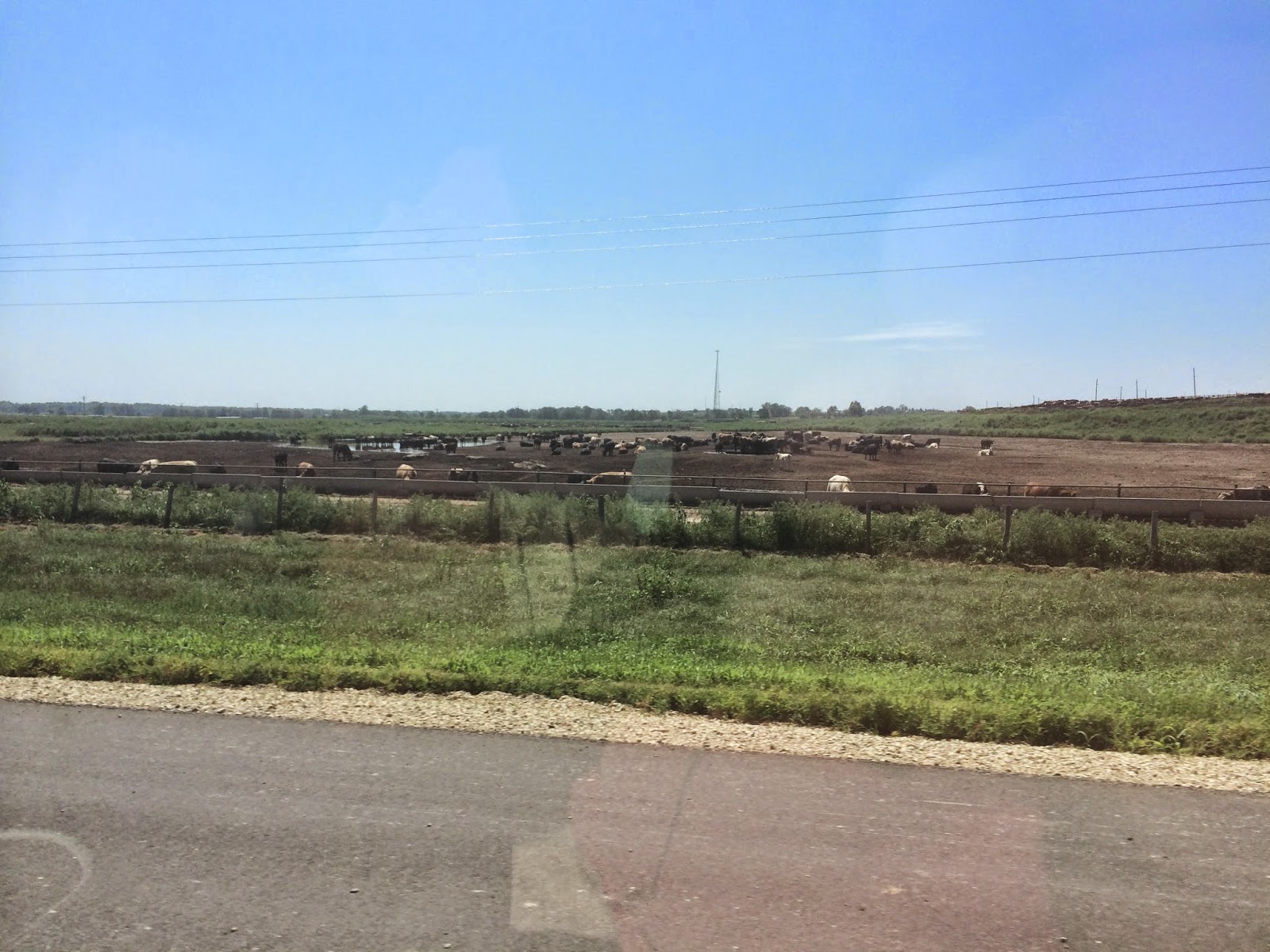 Ultimately with the government gagged it's up to us.  Make it your New Year's resolution to get more involved in this critical issue.

NOTES
Note 1. Thanks to Representative Rosa DeLauro's office for sending me the bill language.   The full passage reads:

There is concern that the advisory committee for the 2015 Dietary Guidelines for Americans is considering issues outside of the nutritional focus of the panel. The advisory committee is showing an interest in incorporating agriculture production practices and environmental factors into their criteria for establishing the next dietary recommendations. The agreement expects the Secretary to ensure that the advisory committee focuses on nutrient and dietary recommendations based upon sound nutrition science. The agreement directs the Secretary to only include nutrition and dietary information, not extraneous factors, in the final 2015 Dietary Guidelines for Americans.

Sounds very similar to the language in this blog from beefmagazine.com.  The attitude is not so different from that of the tobacco industry in the 1950s and 60s, or the junk and soda industries today.

Note 2.  This is the very issue that pulled me into organic agriculture over 40 years ago: creating a healing rather than a damaging food and agricultural system.

I read Farmers of Forty Centuries (text only here, with photos, here) in which F.H. King, a USDA soil scientist and agronomist in the early 20th century, recounted what he learned visiting China, Korea and Japan.  He had seen the damage from the expansionist, extractive trend in US agriculture, as the sod was busted to grow crops for export. I think he could see the dust bowl coming.  But he knew that those Asian societies had fed themselves on a small land base for over 4,000 years.

King found that they did that by recycling all organic matter and growing food for people close to where they needed it.  His book inspired many organic pioneers.

Then I read Pleasant Valley, the 1945 book in which Pulitzer-prize-winning novelist Louis Bromfield describes how he restored the farmland and ecosystem functioning of several Ohio farms that had been ruined by extractive agriculture and the dust bowl.  Springs that had been dry for years started running again. Forests and pastures returned to health.

He chose to focus on beef and dairy. Additionally, Bromfield developed a technique known as conservation farming. This was based on grass farming, which produced large quantities of forage and pasture. Malabar Farm became a national model for sustainable agriculture. In addition to this, Bromfield experimented with composting using manure from livestock on the farm. Square fields were changed to follow the lay of the land so as to discourage erosion. 140 acres were put aside for timber.

One of Bromfield's influences was Sir Albert Howard's An Agricultural Testament, published in England in 1940 and in this country in 1943.  Howard was an English agriculturalist and botanist who was sent to India to teach the "natives" modern agriculture. However he was so impressed with the health of the soil, people, animals and communities there that he realized that what they could teach him was more important.  His book, available for downloading here, also inspired J. I.  Rodale to start Organic Farming and Gardening Magazine.

More recently, in 1979, the USDA issued its Report and Recommendation on Organic Farming, which found that organic farming worked at all scales and that it solved many important environmental problems and should be supported with research and education.  After the 1980 election, that Report didn't stand a chance.

For more recent views see "TwoVisions," my 1997 description of Fred Kirschenmann's perceptions of these conflicting of food and agriculture systems.

Posted by Stephanie Berluti at 3:05 PM