The more we understand about soil, the more important how we treat it becomes.

New understanding and recent research point the way to more fertile soil, healthier crops and healthier people, as well as to a strategy to slow down climate change and adapt to the increasing deluges and droughts it brings. This knowledge may even help us produce better flavor in our crops - a more distinctive terroir or sense of place1.

The focus of this latest research is the rhizosphere, the incredibly active zone around plant roots that is filled with carbon-rich substances given off by roots and with the innumerable organisms - bacteria, fungi, protozoa, nematodes and arthropods - attracted by those substances and organisms.

The best advice for obtaining these benefits: Disturb the soil as little as possible and keep it covered with a diversity of growing plants.

Green plants take carbon dioxide from the air and water from the soil to create carbohydrates and other carbon-containing compounds through the process of photosynthesis. These compounds contain solar energy stored in carbon molecules that can power humans and other organisms.

Some of those carbon-containing compounds are released into the soil through plant roots.  These substances include root exudates such as proteins, amino and organic acids, sugars and phenolics, the mucigels which lubricate a root's passage through the soil, as well as sloughed off root cells.

This process transfers carbon (that used to be in the air) into the soil.

If soil is left undisturbed, some of the carbon emitted by the roots and captured by microorganisms passes through the soil organisms again and again and eventually becomes long-lived humus, a very stable form of carbon.

This is the strategy Kristin Ohlson describes in her book, The soil will save us: how scientists, farmers, and foodies are healing the soil to save the planet.  Much of the climate-changing carbon dioxide in the atmosphere came from the soil as forests and prairies were turned into food and fuel monocultures.

Ohlson writes about scientists and agriculturalists who see the potential for putting that carbon back into the soil with a different approach to agriculture - a climate stabilization solution with other benefits. Perennial crops including pastures, mob grazing 2., multi-species cover crops, permaculture and no-till cropping are all being used now to store more carbon in the soil. These solutions also help the soil absorb and hold onto more water. The northeastern US had a 74 percent increase in heavy downpours from 1958 to 2011, significantly greater than any other area of the country.

A variety of plants...

One square foot of native prairie can have as many as 140 plant species. Greater plant diversity provides a wider variety carbon-rich compounds in the rhizosphere. These compounds encourage a greater variety of organisms which feed off the plants' secretions and promote plant growth.

Although, with up to 50,000 different species of bacteria in a gram of soil, it can be hard to know exactly what is happening. Using RNA sequencing, researchers are now exploring in a limited way, what happens in the soil in response to different crops. When researchers analyzed the RNA in soil growing oats and peas, they found four to five times as many higher, non-bacterial organisms as when the soil grew wheat exclusively. That was after just a few weeks!

We don't need to be scientists to understand that a deep-rooted perennial plant will provide more carbon to the soil than a shallow-rooted annual plant will.  The more time a plant is in the ground and the greater the root system's volume, the more carbon it can pump into the soil.

As a general rule, the more biodiverse an ecosystem or microbiome is, the more stable and healthy it is. All those beneficial and neutral organisms keep the bad ones away, or eat them.

In a teaspoon, or maybe a handful of average soil, there are as many organisms as there are people on the planet. There are billions of organisms from thousands of different species. And, there are many times more organisms in the rhizosphere than there are in bare soil.

These organisms, some microscopic and some as big as earthworms, make up the soil food web. More details here. 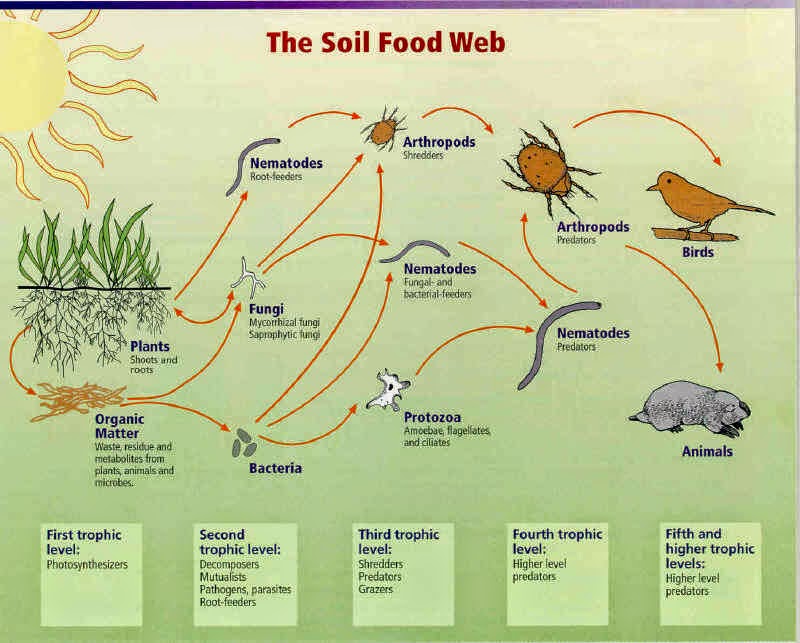 about what hasn't been studied and what we don't know. The rhizosphere is so varied, changeable and localized, that we may never really know everything about it. It is likely that the microbiome at the growing tip of the root is different from the one closer to the plant.)

Sending out for nutrients...

Rhizobia bacteria are attracted by flavonoids exuded by the roots of legumes such as peas, beans and clovers. These bacteria take up residence in nodules on legume roots. There they become solar-powered nitrogen factories, making that element available to the legume and other plants in return for some of the legume's energy-rich carbon compounds. (That seems a whole lot better than fracking to get natural gas in order to make synthetic nitrogen fertilizer, but that's another issue.)

Mycorrhizal fungi are attracted by and grow around or into plant roots and then grow their hyphae out many yards into the soil to get a specific element (phosphorus or zinc for example) and send it back to the root. A fungus may grow hyphae up to 250 yards long and connect with a number of different plants. Communication and collaboration are big in the rhizosphere.  A cubic foot of soil can contain over 300 miles of hyphae!

Bacteria are attracted by root exudates, valuable foods for them, and by the wastes of other organisms. Some bacteria turn nitrogen into a form plants can use and others send the nitrogen back to the atmosphere. Protozoa eat bacteria and excrete nitrogen-rich waste in a form the plant can use in just the right place.

Some fungi obtain nutrients by strangling and absorbing nematodes. The soil food web is a wild place: Eat and be eaten. That is the way of the world; organisms and their wastes are food for other organisms.

Both the roots and the organisms give off glues and gels that are critical for creating and maintaining soil structure and tilth.  This structure protects against erosion and allows roots, air, water and organisms to move through the soil.

As roots grow down into the soil, organisms move down too, opening the soil up for more life, increasing the reservoir of nutrients and water for the plant and storing more carbon. Farmers who have been working with this understanding for a few years are proud to show how they can easily push a probe two to three feet into their formerly compacted pasture soil.

What are we to do?

We need disturb the soil to grow food, right? Pay attention to the "as little as possible" part.

Almost anything is better than rototilling, but if you must till, be sure to till sparingly and turn in a cover crop or compost. This provides organic matter to compensate for what you are sending skyward. Some farmers are now using spaders rather than tillers as a more gentle way to incorporate their cover crops. The more a piece of ground is tilled, the more important it is to give it a long rest with cover crops.

We can learn to be creative using mulches, cover crops, crop selection and succession planting to avoid soil disturbance.

The Rodale Research Farm in Pennsylvania has developed a five-year rotation that involves just one tillage operation and one application of compost.  In five years!  Plants and planning do the rest, leaving the soil covered with plants and undisturbed four out of five years.

Over the thirty years of their Farming Systems Trial, they found that the organic fields produced greater yields with three times the profit, less energy use and fewer greenhouse gases than conventional fields.

Notes:
1. See here for more information.
2. Mob grazing builds on the observations and work of Alan Savory in Africa. Wild herbivores move in herds; their hooves trample organic matter into the soil as their grazing behavior pulls at plant roots. They leave behind urine, manure and hair. This combination stimulates strong pasture regrowth. Greg Judy describes his mob grazing in Missouri in this video from the Virginia Biological Farmers Association conference.

Resources
• Connecticut's NRCS is holding several workshops to spread this understanding.
• Rodale Institute is promoting organic techniques to reverse climate change.
• These books are useful in understanding the rhizosphere:
Teaming with Microbes, Jeff Lowenfels
Tales from the Underground: a natural history of subterranean life, David Wolfe
• These books show that soil abuse is not new:
Farmers of Forty Centuries; or permanent agriculture in China, Korea and Japan, FH King, Written over a hundred years ago, it is available electronically. King saw then that US agriculture was not sustainable.

The Worst Hard Time, Timothy Egan. The story of the Dust Bowl on the southern high plains, of the consequences of plowing up dry prairie to grow wheat.
Pleasant Valley and Malabar Farm, Louis Bromfield. The inspiring of story of the author's restoration of eroded Ohio farms in the late 1930s and 1940s.