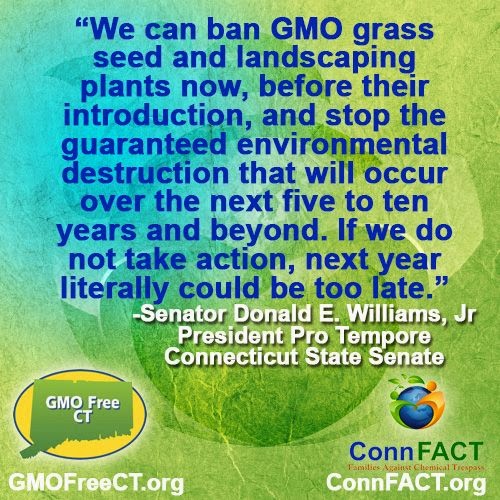 Much of the soil life is stressed or killed by the Roundup, if it hasn't already been destroyed by the chemical fertilizers bluegrass demands.  Landscapers call it a "spoiled brat" plant because of the coddling a bluegrass lawn needs in suburban soils.

This strategy also ignores that fact that many "weeds" are actually beautiful wildflowers,        healthful herbs, delicious greens, important food sources for birds, insects or soil organisms and even indicators of bad turf management.

This is the same weed control strategy being used for crops such as Roundup Ready corn, soybeans, sugar beets, cotton and alfalfa. This "high tech, science based" system is already failing less than 20 years after it went into use. The biotech industry has now developed seeds which resist even more dangerous herbicides such as 2,4-D, one half of Agent Orange, the defoliant used in the Vietnam war.

This chemical arms race for higher profits is bound to end badly. We know that there are other ways to care for the earth and grow our food.

Of course this GMO must be regulated by the government, right? Think again: It isn't!  Because of a loophole in the law and the way this genetic modification was done, there is no regulation or oversight  by any government body. None!

As the investment website The Motley Fool wrote: "..., the introduction of a GMO strain into lawns across the country would be even more insidious than the crop variants [corn, soy and the like], because the Agriculture Department is leaving this seed unregulated. It exempted the strain in 2011 because its creation avoided the use of plant pathogens, so Scotts will be left to self-regulate its proliferation." (1.)

According to the University of Nebraska, "Grasses are the main cause of pollen allergies in the world. Kentucky bluegrass produces more pollen than any other grass in the United States. It ranks second to ragweed in causing hay fever." (2.)

If bluegrass is genetically engineered to be a sales tool for Roundup herbicide, how does that affect its ability to cause hay fever and other allergic symptoms? The government isn't asking.

Although a regularly-mowed bluegrass lawn may not flower and produce pollen, sometimes lawns aren't mowed. In May, the grass blooms and sheds pollen for days as the flowers open up.  That pollen could carry the mutant genes far and wide.

Bluegrass also spreads by sending out runners, so it may get a chance to flower and produce seeds in a perennial border, vegetable garden or under your neighbor's fence. It just wants to spread and reproduce.

It is unthinkable that these questions have not been addressed.

How our food supply is affected

Maybe you think that this Kentucky bluegrass is just for lawns and playing fields and you are mostly concerned about what you and your family eat.

Once the Roundup Ready genetic trait has spread to pastures, it likely will put an end to any organic or non-GMO pastured meat production in Connecticut. Yet, there is an ever increasing demand for organic and non-GMO meat and dairy products.  The animals that produce these products are not allowed to eat genetically modified organisms.

If this and similar grass seeds are allowed to be planted, at some point in the future, all pastures will contain genetically modified bluegrass. It could be 10 years or 50 years in the future. No one knows.

Most land care professionals recommend planting a mix of grasses, perhaps fescue and rye with bluegrass to provide resilience and good color year round.  Many suggest adding clover to provide nitrogen. (3.) Temperatures, water availability and other factors change during the year and from year to year. With a mix of grasses, one will grow better if another is stressed, a perfect example of the basic resilience that diversity provides.

This simple strategy for resilience is completely ignored and thwarted by Roundup Ready bluegrass.

In a very revealing speech at the University of Nebraska, Robert Paarlberg, a long time defender of industrial agriculture stated: "Conventional agriculture as practiced in states such as Nebraska is under strong attack from people who believe it is unhealthy, unsafe, environmentally unsustainable and socially unjust. These forces want a shift from large-scale, specialized, highly capitalized farming systems to smaller scale systems that integrate crop and livestock production. Instead of internationally traded foods, they want local foods and instead of genetically engineered food, they want organic food."

Is there a problem with this?  Yes we do want organic food and social justice too!

In this case, it is just a genetically modified grass, but it is a part of a dead-end approach to living on this earth.  We need to raise our voices to "Just Say No" to GMO grass and other perennials. Click here to learn what you can do.