We're Not Buying It Reveals Deceptive Food Marketing to Children 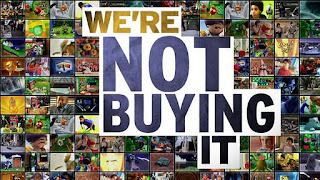 A new article by the Prevention Institute sheds light on the We're Not Buying It campaign, a movement that exposes a serious problem in the United States - the marketing of junk food to children, often with the use of deceptive tactics.  We're Not Buying It aims to put the health of our nations children first, and as a means of accomplishing its goals, has started a petition that asks President Obama to support federal government guidelines that would provide voluntary standards for the foods marketed to kids. The Campaign explains, "In response to our campaign, Congressman Lee Terry is making outrageous claims—saying that the voluntary IWG guidelines will stop companies from making ads for celery. Of course, food companies don’t target our kids with celery ads—they bombard them with ads for foods high in fat, sugar and/or salt. In fact, Prevention Institute’s previous food marketing studies, 'Claiming Health' and 'Where’s the Fruit?', revealed that that the majority of children’s foods that industry claimed were healthy had too much salt, sugar or fat; and most of the food with fruit on the label were just that: fruit on the label, little in the product."

Junk food, and junk food marketed as "healthy" food have been major contributing factors to skyrocketing obesity, diabetes, high blood pressure, and strokes among adults, and now among a growing number of children.  Despite overwhelming scientific evidence to support this, food and beverage companies continue to spend billions of dollars promoting unhealthy foods virtually everywhere kids go.  This illustrates a key point: food and beverage companies do not always have our best interests in mind.  As consumers, we must make our needs clear in order to change these destructive practices.